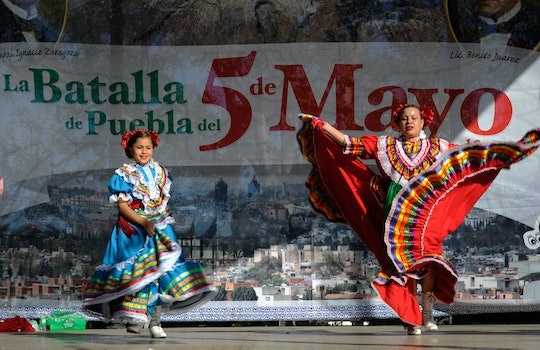 How To Celebrate Cinco De Mayo Without Being Culturally Insensitive

It's that time of year again. Cinco de Mayo is upon us, and that marks how many years that we've enjoyed an extra plate of tacos and toasted our margaritas to, what exactly? Mexican culture? A battle of some sort? Wait, isn't it just another American marketing ploy to generate more alcohol sales? That's right, plenty of us take any chance to kick back with a fresh cerveza in the name of being cultured without actually being cultured. So, here's how to celebrate Cinco De May without being culturally insensitive, because, yes, it matters.

According to Farhat Khan, Director of the Multicultural Resource Center for Chicago Public Schools, when you participate in any cultural or ethnic celebrations, you should do so without attaching or practicing any stereotypes to it. "You should view this as celebrating ethnicity and cultural heritage," she tells Romper. "Examples of stereotyping would be to make any assumptions about Mexican culture or people based on media or popular societal perceptions."

If you choose to participate in Cinco de Mayo or any other cultural or ethnic celebrations, it is well advised that you equip yourself with appropriate information and resist appropriating a culture you're not a part of, says Khan. That means no sombreros or fake mustaches.

Cinco de Mayo is actually a celebration of the Mexican victory over France in the Battle of Puebla in 1862, as noted by NBC News, but many of those celebrate the day here in the U.S. don't even know that. Instead, many choose to use the day as an excuse to drink margaritas from a local chain Mexican restaurant and dress in stereotypical cultural garb, like sombreros and serapes.

As CNN noted contributer Paul Reyes pointed out, "Just consider how it would strike us if we saw another country marking the Battle of Gettysburg with binge drinking and Uncle Sam hats." Instead of making Cinco de Mayo about appropriating cultures and propelling racial and ethnic stereotypes, take some time to actually appreciate the culture and people with whom you share this country. There are ways to be racially sensitive and celebrate a day like Cinco de Mayo — you just have to make yourself a little more aware.

According to Mashable, "In Mexican culture the sombrero, 'ponchos,' the music, the dancing, and even the tequila that was first made by the Aztecs have several cultural struggles behind them that a lot of people don’t understand." It can be truly hurtful to some people if others try to own those things without even taking a few minutes to understand the stories and people behind them.

Margaritas and Mexican food are delicious and enjoyable, there's no denying that. But instead of hitting up your local chain restaurant once again, why not make it a point to seek out true Mexican food from a place run by Mexican people? Not only will you be supporting a small business and people of color, but you'll also get to taste the good stuff. And, let me tell you, it's good.

While you're there, enjoy some authentic Mexican music and talk to some Mexican people. Learning about other lives and cultures is one of the best parts of America. And Cinco de Mayo, like any other day, is a great day to make an effort to learn about a culture so important to this country.

And keep in mind that focusing the day on drinking fails to pay respect to the true spirit of Cinco de Mayo — social justice, as noted by TIME. If you truly want to commemorate Cinco de Mayo, putting a little effort into advocacy or fundraising for an organization that supports immigration rights, people of color, or ethnic and racial groups in your area would be much more appropriate.