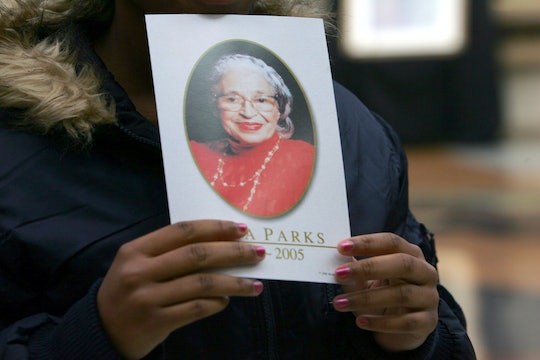 How To Celebrate Women's History Month, Because Women's Contributions Are Crucial

Personally, I think the best way to celebrate Women's History Month is to read up on past women's accomplishments, to both honor the women whose legacies have often gone unnoticed and to improve the world for future women.

Learning about women's contributions in the past can help us combat present-day bias where we need it most. The low numbers of women in STEM fields aren't due to a lack of interest from women, nor are they due to a higher commitment to their families above a career, according to The Harvard Business Review. What's actually blocking women from cracking open STEM careers is biases, since both men and women are more inclined to hire men in STEM fields.

Knowledge is power, and one of the reasons people have those biases is because of their mental schemas. When people think of many areas — from engineering to science to physical feats to political movements — they tend to think of the stories of famous men in those areas. People need to learn about the less-famous women behind these areas and moments in history, because women have always made important contributions in so-called male fields, even when they faced opposition in order to do so.

Without further ado, here's a few of the ladies you should know about.

Austrian actress Hedy Lamarr co-invented a wireless communication system to fight Nazis in World War II — and if that wasn't impressive enough, her system later on became the foundation for WiFi and cell phone networks, according to Levo.

As the first female head of state in Africa, President Ellen Johnson-Sirleaf turned Liberia around in 2006. She gave the country its first Freedom of Information bill and established a Truth and Reconciliation Commmission to investigate crimes that occurred during Liberia's civil war. She won the Nobel Peace Prize in 2011 for her work in using female empowerment to fight corruption, dictatorships, and poverty.

Bras: love them or hate them, you have to admit they beat the hell out of a corset. Socialite Mary Phelps Jacob invented the first bra in 1910 and eventually sold her patent to the Warner Brothers Corset Company. Ever since, we've been using Jacob's invention. (And no, I had no idea that the Warner Brothers were in the corset business back then, either.)

Physicist Shirley Jackson made discoveries in physics that led to the invention of fiber optic cable, the touch-tone telephone, caller ID, and call waiting. She's also represented the U.S. in atomic energy conferences, worked as a professor, and been the chairman of the U.S. Nuclear Regulatory Commission.

Programmer Grace Hopper, along with Howard Aiken, created Harvard's 1944 Mark I computer, was on the team that developed the world's first programming language, and was the first to use the term "debugging" when she had to remove a moth from the Mark I.

Hopper was not included in many newspaper pictures of accomplishments she'd had a direct hand in. However, judging by her career, every time she hit a roadblock because she was female, she just went on to do bigger and better things.

Annie Dodge Wauneka was the Navajo Nation's first female legislator and a huge advocate for education and health improvement. She was on the Navajo Tribal Council for more than 30 years, where she advocated for improved public health — a goal she decided on much earlier in life after witnessing an influenza outbreak at her boarding school. She's seen as one of the main reasons tuberculosis was eradicated among the Navajo in the 1950s.

We all know Amelia Earhart, and she was certainly a force to contend with. But pilot Bessie Coleman likely faced more challenges than Earhart in getting her license. At 23, Coleman realized that, as a black woman in the U.S., she would have to go to France if she was going to realize her dream of becoming a pilot. She returned to the U.S. in 1921 and became the first African-American female pilot, where she encouraged others to do the same and famously refused to perform at events where African-Americans weren't allowed to attend.

Austrian writer and explorer Ida Pfeiffer wasn't allowed to join the Royal Geographic Society of London because she was a woman — but that didn't stop her from trekking Istanbul, Jerusalem, Giza, Italy, China, Brazil, India, Iraq, Indonesia, and Borneo, and then writing about all of it. She eventually got to thumb her nose at the RGS of London, as the geographical societies of Berlin and Paris welcomed her in. (Even in 2016, women are still criticized for traveling alone, but Pfeiffer is a great example of going for it anyway.)

It's hard to think of any ladies more respected in Dominican history than the four Mirabal sisters, who eventually became the focus of the book and movie In the Time of the Butterflies. These ladies, codenamed "butterflies," were deeply entrenched in an underground movement to fight the dictatorship that held the Dominican Republic for more than 30 years. Three of the sisters were assassinated in November 1960, and it was a turning point for the country: six months later, dictator Rafael Trujillo was killed.

One of the best ways we can honor these amazing women is by knowing their stories and sharing them. Their names might not spring to mind as easily as the names of men who have accomplished the same feats, since women tend to be covered less in history books. But, by doing your research and sharing their accomplishments, you'll help inspire a new generation of women.

And hey, if your idea of celebrating Women's History Month includes throwing a party as well, that's even better.