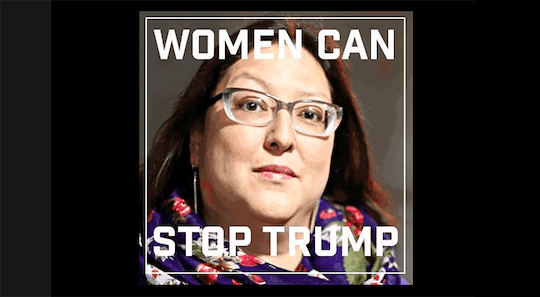 How To Change Your Avatar To #WomenCanStopTrump

Sunday night marks the second of three presidential debates between Democratic candidate Hillary Clinton and Republican candidate Donald Trump. Trump's first presidential debate performance could hardly be called a victory, and heading into Sunday's debate he has an even greater challenge ahead. A leaked recording revealed Trump making disgusting, misogynistic comments about women and sexual assault. Trump's casually spoken example of rape culture has infuriated women and men across the country. In an act of social media solidarity, the avatar hashtag #WomenCanStopTrump has been trending before the debate began. Wondering how to change your avatar to #WomenCanStopTrump? It's easy-peezy, lemon squeezy.

The original "Women Can Stop Trump" campaign was started by the progressive political action committee EMILY's List. They launched their campaign on the second day of the Republican National Convention in July. In a press release, EMILY's List described the campaign mission was to "educate and empower voters on the Republican nominee’s offensive worldview and dangerous policies toward women." While Trump's views on women are hardly a secret, no one could have predicted those views would be exposed as the train wreck that has been his campaign over the past three days. Ready to show that that #WomenCanStopTrump? Here you go:

If you need a more technical how-to guide, here's a quick walkthrough. The #WomenCanStopTrump overlay on Your Facebook and Twitter avatars is something called a "Twibbon." Just head to the #WomenCanStopTrump Twibbon campaign page and choose whether or not to add the twibbon to your Facebook profile picture or your Twitter avatar. You don't have to pick just one, either — you can add your Twibbon to both social media platforms.

Not only is it a great way to spark conversation on social media about where you stand on Trump, but it makes identifying allies in your cause that much easier across social media, too. My avatars already have my #WomenCanStopTrump pledge added — are yours?