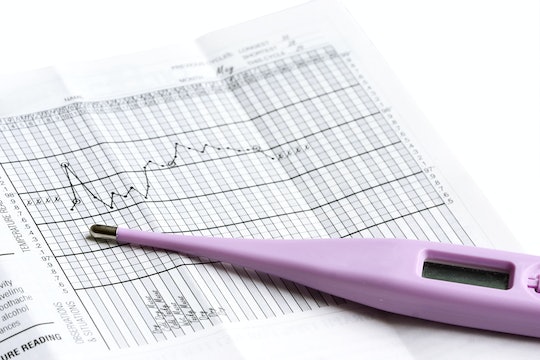 Charting Your Fertility Isn't As Difficult As You Think

Whether you are trying to get pregnant or trying to avoid pregnancy through natural methods, it is a good idea to get familiar with your body’s cycle. Tracking your period and menstrual cycles is a start, but there are a few other ways to get in tune with your fertility. If you’re trying to get pregnant (or just want to avoid it), you’ll want to know how to chart your fertility. (It's not as difficult as it sounds.)

When you chart your fertility, according to the American Pregnancy Association (APA), you observe certain aspects of your body’s natural functions in order to determine which days you are the most fertile. This can help you achieve pregnancy by finding the most fertile days to have sex if you want to get pregnant, and can help you avoid it by skipping sex on those days. The best place to start, suggested the APA, is by keeping track of your period to get a general idea of your cycle length and timing.

Even though it seems a little weird and gross, checking your cervical mucus can provide a lot of insight into fertility, too. Planned Parenthood explained that throughout your cycle, hormones can change the texture, quantity, and color of your cervical mucus. You can chart your cervical mucus by taking some between your fingers and rubbing it or stretching it to check the consistency. Then, make a chart of period days, dry mucus days, and wet mucus days. When your cervical mucus is clear, slippery, and stretchy, like a raw egg white, noted the APA, this indicates ovulation and is the best time to have sex if you’re trying to get pregnant.

You can also use an ovulation test or fertility monitor to help chart your fertility, suggested the APA, and detect the increase of the luteinizing hormone, which surges right before ovulation. The luteinizing hormone, when increased, triggers the release of an egg from your ovary, which is the ideal time for sex. If your ovulation test indicates this surge, the APA recommended having sex within the first three days of the positive result to increase your chances of pregnancy.

After charting your fertility for a year or more, with no positive results, you might consider talking to a fertility specialist, who can accurately test your fertility and help you with conceiving. The first step in trying to get pregnant, or trying to avoid it, is knowing the mechanics of fertility and ovulation, so that you are better prepared for either outcome.