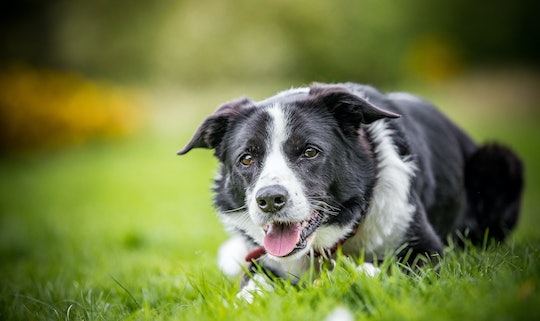 How To Check For Ticks On Dogs, Because It's Officially The Season

My sister has two dogs, which means a lot of drool, lots of love, and a whole lot of checking for ticks, especially in the summer. It was a few years ago that she learned to be extra diligent, following a terrible incident with her eldest pup, Wellesley, where he became lethargic and his legs were limp. It turned out he had a tick bite that, fortunately, was able to be treated. But it made my sister that much more determined to learn how to check for ticks on dogs. It turns out there are a few precautionary steps every dog parent will want to take in order to keep your furry friend safe.

According to the American Kennel Club (AKC), it's important to first know where to check your dog for ticks because there are several spots they like to hide out. You will typically find ticks on your dog inside their ears, between their toes, under their tail, in their genital region, around their eyelids, and under their collar, the website noted.

"Tick prevention should be taken seriously, and not just because these arachnids make many people squeamish — ticks actually carry quite a few deadly diseases," the AKC said. "Some of these diseases are lifelong, with no cure, so being diligent in checking for and removing ticks is important."

Since collars are not typically removed, The Dogington Post noted that "it's possible for a tick to make a little home underneath it without anyone noticing." Commonly overlooked spots, like crevices in the ear or between the toes, also make it easy for ticks to hang around unnoticed.

"If you notice your dog licking or chewing his feet, there might be something bothering him, and that something could be a tick," the AKC said.

According to petMD, symptoms of a tick bite typically appear six to nine days after a disease-carrying tick has attached to the skin of your dog. "This disease is somewhat seasonal and more prevalent in the summer time in certain areas of the U.S.," the website noted. "In areas where the seasonal temperatures are more consistently warm, such as in the southern states and northern Australia, ticks may be present throughout the year."

Symptoms of tick bites in dogs include vomiting, regurgitation, unsteadiness, high blood pressure, fast heart rate, difficulty eating, excessive drooling, weakness (especially in the hind limbs), partial loss of muscle movements, and/or complete loss of muscle movement (paralysis), which is commonly seen when the disease has advanced, according to petMD. If these symptoms lead you to suspect your dog has been bitten by a tick, then you should seek veterinary attention immediately.

If you do find a tick on your dog's skin, then you can take measures to remove it. The AKC suggested that using a pair of tweezers is the most effective way to remove a tick. "You should use fine-point tweezers, to avoid tearing the tick and spreading possible infections into the bite area," the website noted. "Spread your dog’s fur, then grasp the tick as close to the skin as possible. Very gently, pull straight upward, in a slow, steady motion." Do not attempt to remove a tick with your fingers.

Regularly checking your dog for ticks can help keep your pet safe, as well as investing in a natural flea and tick spray made from a blend of peppermint oil, cedar oil, and other natural oils. There are also topical treatments, collars, and shampoos that can be useful in preventing ticks and other biting insects, according to the AKC.

Keep in mind that just like your human kids, you'll want to use your mom instincts with your furry family members. If you suspect something's up with your pooch, then you're probably right.