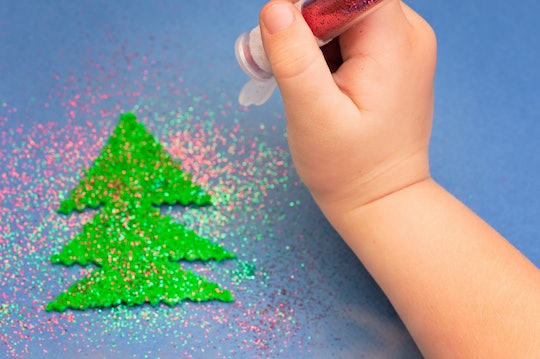 How To Clean Up Glitter, 'Cause It's In All Your Nooks & Crannies

When it comes to glitter, you either love it or hate it (or you love it but you secretly fear it's an environmental hazard). Still, there's no question that the sparkly stuff adds some much-needed and appreciated glitz to the holiday season, from the shimmery snowman art project your kid brings home from school to the twinkling bulbs hanging from the branches of your tree. The only problem is that it's bound to end up all over everything else in the house, too — like pine needles, only worse. So how do you clean up glitter for good?

It can be done (pretty much), but we don't blame you if you're skeptical. They don't call glitter "the herpes of the craft world" for nothing: That stuff spreads, and when it spreads, it sticks. (More than one mom has accidentally gone to the grocery store looking like she was ready for a rave after doing arts and crafts with her kids.) Right up there with trying to get sand out of the car after a trip to the beach, attempting to eradicate all traces of shine from the cracks and crevices of your home and body is a challenge even Martha Stewart would likely shrink from. But you're not doomed to a perennially dazzling future, you just need to know a few tricks of the trade.

How you go about cleaning depends on the level of glitter disaster you're dealing with. Let's say, for example, that your toddler knocks an entire jar of glitter over onto the floor. (Not that anything like that would ever happen, because toddlers are known for being super careful and coordinated, right?) But in this unlikely event, your first line of defense is your trusty vacuum. Use the crevice attachment to get into hard-to-reach places, suggests Real Simple. Then, attack what's left with a lint roller, which works on just about any surface — even pet fur! If the glitter spilled on a carpet, put on a rubber glove and loosen the buried bits with your fingers before using your vacuum's upholstery attachment.

For truly stubborn spills, you might want to consider upgrading from a lint roller to duct tape, which is stickier than a lint roller; for that reason, however, it shouldn't be used on anything too delicate. Another option for surfaces that won't stand up to duct tape? A balloon! Just blow one up and rub it against the carpet to work up some static electricity, then use the balloon like a magnet to attract stray glitter.

But what if you're plagued with a piece of twinkle dust on your face, and you're not in the mood to pretend you're glamming it up on purpose? A bit of coconut oil on a cotton ball should do the trick. And if a regular shampooing doesn't wash that mess right out of your hair, you can try spritzing a paper towel with hair spray and dabbing it on the affected areas.

If the thought of all that wasted glitter bothers you, there is a way you can re-use it, sort of. Even better, this particular method gets your kids involved in the clean-up. Assuming the glitter is on an otherwise clean surface (like, not a floor that's also covered in cookie crumbs or pet hair), have your little ones get out their Play Doh and press it into the glitter, rolling it and working it into the mound of molding dough until the table is clean (and the Play Doh is super fancy).

In truth, you might not be able to completely remove every single last speck of glitter from your house, especially after the holidays, or a big celebration, or let's be honest, Saturday. It's just part of your life now, and the sooner you accept that, the happier you'll be.