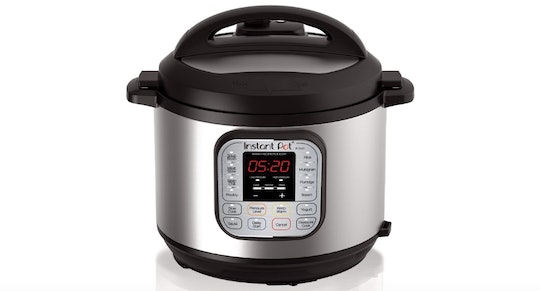 Here’s How To Convert Crock Pot Recipes To Instant Pot, Because Speed Matters

After taking the culinary world by storm a few years ago, the Instant Pot has proven it is no passing trend. This high-powered pressure cooker is here to stay, so make the most out of this multipurpose kitchen tool. For instance, learning how to convert crock pot recipes to the Instant Pot can unlock all sorts of new dinnertime possibilities. To be honest, I have not even touched my (once-beloved) slow cooker since buying an Instant Pot. The new gadget is just too easy to use.

For starters, though, it's important to understand the difference between a slow cooker and an Instant Pot. Although they can cook similar dishes, these gadgets operate in different ways. As the name implies, a slow cooker cooks food at a low temperature (~175°F to 200°F) for a long period of time, oftentimes taking several hours to complete the process. But the Instant Pot operates at a much higher temperature (~239°F to 244°F), often cooking the same dish in under an hour, as noted on the Instant Pot website. But can you get that same super-tender texture and amazing flavor in the electric pressure cooker? In a word, yes. Your grandmother's crock pot recipes for fall-off-the-bone pork will work just as well in the Instant Pot, as long as you know the conversion tricks. Plus, you don't have to wait for hours and hours for it to cook, getting hangrier by the minute.

First, you will need to decrease the cooking time for meats considerably. In general, meats that cook for 8 hours on low (or 4 hours on high) in a crock pot can cook in about 25 to 30 minutes in the Instant Pot, as explained in Kitchen Stewardship. Just be sure to use the "meat" or "poultry" buttons appropriately, and double-check that seal button. Seriously, nothing is sadder than returning to your Instant Pot and realizing you accidentally left the dial on vent, effectively cooking nothing.

Next, there's the whole liquid component. Slow cookers don't need that much liquid, but electric pressure cookers are a different creature. Make sure there's at least a cup of liquid in your Instant Pot when you cook, as noted in Taste of Home. Liquid is necessary for the pressure cooking to function at all, really. You can prop up food in the steamer basket if you're concerned about the dish getting too watered-down.

Lastly, knowing which ingredients to leave out of the Instant Pot is crucial, because not everything reacts well under pressure. For instance, milk should not be used when pressure cooking in an Instant Pot, because the pressure can turn it into a scalded mess, as noted in Super Healthy Kids. You can add it at the end, or experiment with nondairy options. Also, it's a good idea to wait until the dish is finished before adding thickeners such as flour or corn starch, because these can also turn messy, as further noted in Super Healthy Kids. Otherwise, you should have no problem turning some awesome crock pot recipes into super-fast and easy Instant Pot meals.