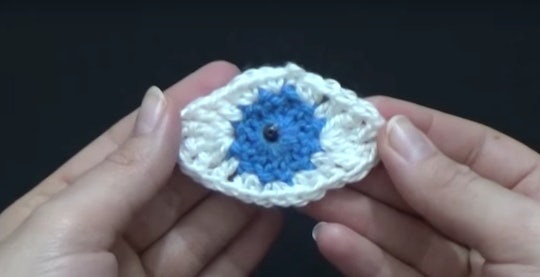 If It's Too Hard To Make Gloves For March For Our Lives, This Crocheted Eye Is Way Easy

I was first introduced to the evil eye symbol when my sister-in-law brought me one back from a trip to Turkey. That's when I learned that the image has been symbolic for thousands of years and is meant to protect one against evil forces — it's the perfect symbol for protesting gun violence this weekend. While Pussyhats were the DIY of choice for the Women's March last year, the handiest among us are teaching us how to crochet an evil eye for March for Our Lives this Saturday.

With only a few colors of yarn and a crochet hook, you can whip up evil eye symbols to add to your own grey gloves (handmade or store bought), which are the style du jour for the March for Our Lives taking place on March 24 in Washington, D.C. and across the country. If you haven't had enough practice with your knitting needles or crochet hook to master making your own evil eye gloves, we have just the tutorial for you to try your hand at making just the evil eyes. And of course, if you can crank out a few evil eyes, for yourself and fellow marchers, you can attach them to any surface you want before the march this weekend — like your backpack, shirt, or hat, offering maximum protection from evil wherever you go.

The Charlotte Observer reported that Krista Suh, a California artist who created the pink Pussyhat for the 2017 Women’s March, has come up with another idea for this march — a pattern for the evil eye gloves. The gloves are "designed to let elected officials know people are watching them, as well as symbolize protection for schoolchildren and other shooting victims."

Kiki Crochet has posted a helpful video tutorial that will help illustrate how to crochet an evil eye even more clearly. You'll need two colors of yarn, white and something cheerful for the iris part, along with a crochet hook and safety pins for adhering your eye to your outfit. You begin with 12 double crochets in the center before moving outward with the white yarn. While you might not be as fast as Kiki is from the start, she does make it look remarkably simple to pick up rather quickly.

If you're hoping to crochet with a crowd of your buddies, you might be on the hunt for the right supplies. Start with a set of colorful crochet hooks, and then stock up on yarn. You'll need a whole lot of white yarn, as well as a few other colors, like blue and pink, to help add to that sea of eyes protecting you. None of those supplies should break the bank, and they'll give you a great way to get ready for the march with friends.

While we often refer to the evil eye as the glare moms give their kids when they want them to stop taking all the candy bars off the shelf in the grocery checkout line, the evil eye actually has a long history. Live Science explained that "The evil eye is a human look believed to cause harm to someone or something. The supernatural harm may come in the form of a minor misfortune, or more serious disease, injury — even death." And the evil eye doesn't mess around. It can cause such symptoms as "loss of appetite, excessive yawning, hiccups, vomiting and fever," in addition to "insomnia, fatigue, depression and diarrhea." The evil eye talisman that so many bear is actually intended to ward off evil and protect the carrier (not inflict negative energy).

References to the evil eye can be found in Greek and Roman texts, Shakespeare, as well as the Bible and Koran, so the symbol and its potential harm have been taking seriously by many cultures and generations. All the more reason to get your crochet hook out and start warding off potential danger ahead of this weekend's march!