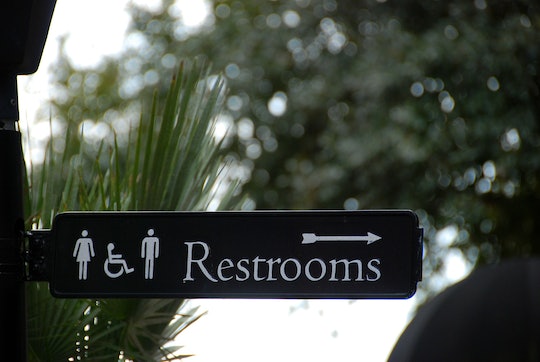 How To Cure Constipation In Early Pregnancy

Even early in pregnancy, your body is dealing with major changes. Some women battle morning sickness y, some experience debilitating fatigue or heartburn, and some, well, some find that they just can't poop. Experiencing constipation early on in pregnancy isn't all that uncommon, but the fact that you're not alone likely doesn't cheer you up much when you're gassy, bloated, and generally feeling awful. If you find yourself in that camp, you need to know how to cure constipation in early pregnancy.

When you get constipated during pregnancy, it's often due, at least in part, to your changing hormone levels. According to the What To Expect website, constipation during pregnancy can also be caused by iron-heavy prenatal vitamins and an expanding uterus, which tends to give the colon less space in which to work. Additionally, given that you now have a greater blood supply, it takes a much greater influx of fluids to keep you hydrated, according to Parents. Dehydration can lead to constipation (among other things), so you want to avoid that.

It seems that the deck is stacked against pregnant women when it comes to constipation. There are so many factors in early pregnancy that can lead to constipation that chances are, you won't make it through without getting a little constipated at some point. The good news, however, is that there are a lot of things that you can do to counteract all those constipating factors and get you the relief you so desperately need.

According to WebMD, there are some over-the-counter constipation medications that are safe to use while pregnant, including psyllium, though you should check with your doctor first for safety, especially if you're still in your first trimester. They will be able to tell you if what you're hoping to take is safe or advise you to try something else instead.

Another good way to help alleviate any uncomfortable early pregnancy constipation is by upping your daily intake of fluids. According to Healthline, pregnant women should drink at least eight 12-ounce glasses daily. Water helps soften stools, making it easier to poop and keeping you from having to strain or suffer through the side effects of constipation.

According to the aforementioned article from Parents, your typical healthy lifestyle can also help ward off constipation in early pregnancy. Eating lots of fresh fruits and vegetables, legumes, and whole grains can help because they're rich in fiber. Yhe previously-mentioned article on the What To Expect website, however, noted that if you're going to add fiber into your diet and you're not used to eating a lot of it, take your time. If you don't, you'll likely feel bloated and gassy due to that too. According to the previously-mentioned article from Healthline, it's also a good idea to break those fibrous meals up into mini-meals and eat smaller meals throughout the day so that your digestive system doesn't have to work so hard. Exercise can also help get things moving, if you know what I mean.

Though it may seem that the discomfort associated with constipation in early pregnancy will never come to an end, it will. Implementing basic lifestyle changes and chatting with your doctor about fiber supplements, other pharmaceutical offerings, and DIY remedies can help ease the pain and get things moving once again.