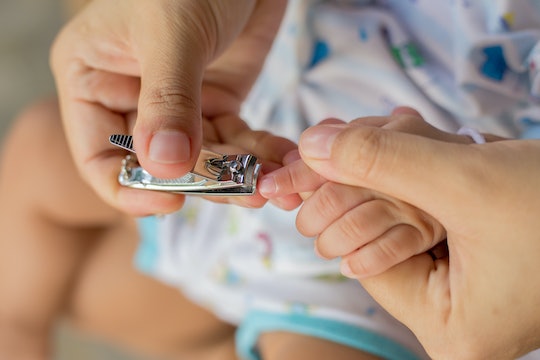 How To Cut Your Baby's Nails

Moms are usually pretty hard to rattle. They deal with dirty diapers, bodily fluids, tangled hair, meltdowns on a daily basis. So you'd think that learning how to cut baby's nails would be one of the easiest tasks for moms to conquer. In reality, however, it may be the most terrifying. That's because cutting microscopic, almost invisible baby fingernails is a difficult undertaking.

You don't realize the horror that goes into cutting baby fingernails until you've tried it yourself. The point where nail ends and skin begins is almost indistinguishable, and then there's the fact that you have to hold down your baby while using the giant fingernail clippers "designed" for their little hands. It's all a juggling act that requires bravery, stealth, and patience. But it's also a task that every parent can — and must — undertake.

Healthy Women suggested filing your baby's nails down before cutting them, which is the safest and simplest way to do it. If, however, you're determined to attempt the impossible, Baby Center noted that you'll need is a pair of fingernail clippers designed for babies. For newborns, you can use a pair of baby scissors or baby clippers, which are allegedly easier and safer to use than adult sized clippers.

Additionally, Baby Center noted that the best time to cut your baby's is immediately after a bath, when their nails will be softer and easier to cut. You can also try to cut them while baby is asleep, to minimize the risk of accidentally clipping their nails too short or cutting their skin.

The Dr. Sears website instructed parents to gently pull the nail back from the finger pad and clip the bit of nail that sticks over the skin. Since babies have sharp nails, you may need to trim a few times per week to minimize the risk of them scratching themselves.

If worst comes to worst and your baby just isn't having it (it's no secret that most babies aren't huge fans of having their nails trimmed), have your partner help you hold their hand while you clip.

It might take some getting used to, but with practice and patience, you'll be able to trim your baby's nails like the master mom you are.