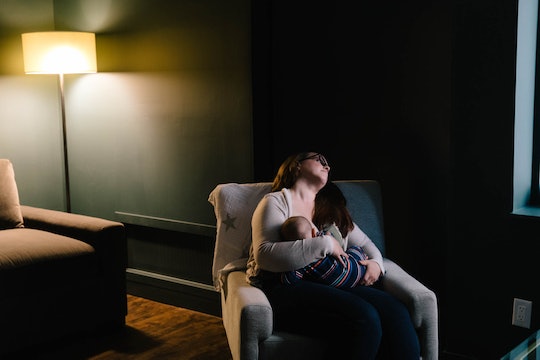 How To Deal With Breastfeeding Aversion, According To An Expert

Breastfeeding can be a really challenging experience for many moms, one steeped in expectation and external and internal pressures. Often, just the physiological complaints of breastfeeding are numerous enough to make a mother want or need to step back and evaluate. This is true even with avowed breastfeeding mothers who've been doing it for a while. A little studied, but very real challenge some breastfeeding moms experience is called breastfeeding agitation and aversion, and it can be crushing. Learning how to deal with breastfeeding aversion, especially if you're working under the assumption that it's unnatural to feel this way, is paramount.

When it comes to breastfeeding agitation and aversion (BAA), there isn't a ton of literature published. In fact, one article researched by Zainab Yate seems to be the only one shedding light on the phenomenon. Yate coined the acronym BAA to describe breastfeeding agitation or aversion, and her work was published in the peer-reviewed journal, Iranian Journal of Nursing and Midwifery Research after Yate found a huge hole in science literature surrounding this experience. In her work, she found that breastfeeding agitation or aversion can vary in forms and is characterized by a "skin crawling sensation" to remove your infant from your breast or feelings of "anger or rage."

Despite there not being a ton of articles on the subject, the tangential studies we do have point to a similar negative emotion tripped in breastfeeding agitation and aversion as in D-MER, also known as milk ejection dysphoria, but triggered instead by the latch and not relenting after a period of time. Because of the lack of research, therapists are forced to draw their own conclusions based upon individual patient response and treat from there.

I spoke to Daniela Althusser, LCSW, and inquired about how to deal with breastfeeding aversion. She tells Romper, "Unfortunately, even really skilled therapists know very little about it. It's not taught in school, and it doesn't really come up in our periodicals or our conferences. This is likely because it's a condition which many would associate with shame." She's absolutely right. When I asked in a mom group I belong to on Facebook if anyone had experienced it, several women — women who by all accounts would be considered "granola" or "crunchy" mothers — all said that they felt like acknowledging that feeling would be like acknowledging a deficit in themselves.

This couldn't be further from the truth. Women are conditioned not to seek psychological assistance, even when it would behoove them, because we've been told that we need to be all things to all people and must live up to an overinflated ideal of motherhood. To accept that there's a hiccup or problem personally is one thing, but to announce said hiccup is to extend yourself into the public sphere with your own sense of inadequacy and shame, and many women simply cannot abide that notion.

Althusser says that therapy for breastfeeding agitation might not always be successful though, as there is limited study asserting that it may be linked to unavoidable hormonal patterns or with a baby's nascent signs of weaning. "From what I've read, BAA is often seen in women who are pregnant and still nursing, or for women who choose to extend nursing to an older child. It is possible that it's an ingrained evolutionary response to weaning, leftover from somewhere in our hindbrain that is telling us, 'your baby is getting adequate nutrition elsewhere,' or 'your body needs the calories its expending on breast milk to grow your fetus.'"

It's a complex issue and one that's not likely to be solved overnight. According to La Leche League International, the worst symptoms can dissipate in some women, but not all. Althusser suggests making sure your diet is really rich in vitamins and nutrients, that you're well-rested, and that you're getting plenty of exercise, as these have more impact on your mental wellbeing than you might imagine. She also suggests meeting up with a therapist who specializes in a broad range of postpartum disorders, and also a lactation consultant who's likely seen a case or two in her career. Remember, just because you feel this way when your baby latches doesn't mean you love that baby any less, in spite of how it may feel. When it comes to parenting, we're all just doing our best. For more help and resources, you can check out Yate's website on breastfeeding aversion and agitation.