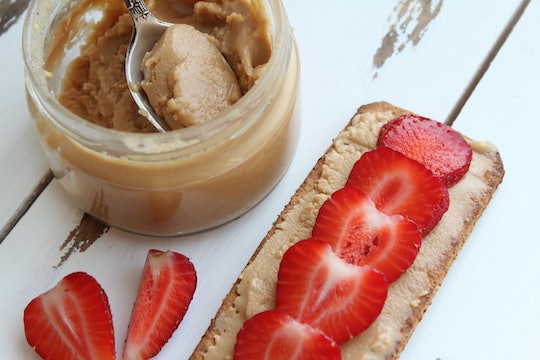 How To Deal With Food Allergy Bullying, Because It's A Real Struggle For A Lot Of Kids

Actor Scott Churchson, of The Deuce and America's Got Talent fame, remembers being a 7-year old kid who couldn't eat chocolate because of an allergy to the cocoa bean. At school, he gave his candy bars away, and stopped trick-or-treating at a young age. It didn't end there. Soon, he had to learn how to deal with food allergy bullying. "The big problem I dealt with was not just other kids, but parents as well," Churchson tells Romper. Kids would laugh at him, call him a liar, and even beat him up. Meanwhile, parents at his school thought he made the whole thing up, because, "Who ever heard of a chocolate allergy?" It all sounds like a dark scene from Charlie and The Chocolate Factory.

While cocoa bean allergies are rare, food allergy bullying is unfortunately on the rise. Four leading allergy organizations recently formed a coalition to address an ugly problem. At No Appetite For Bullying, they encourage kids to share their stories, and read the stories of others. The campaign also hopes to raise awareness of the seriousness of food allergy bullying — which can be life-threatening. In fact, jokingly waving a nut to get a rise out of a severely allergic child in class isn't so different from brandishing a loaded gun.

Food allergies affect 5.9 million children, according to Food Allergy Research and Education (FARE). To put that another way: 1 in 13 children, or about two kids in every classroom, suffer from a food allergy. Sound like a lot? It is, and allergies are on the rise, according to the Centers for Disease Control and Prevention (CDC). When you think about how much of a child's social life is governed by food — ice cream and pizza parties, birthday cake, and food fights at lunch time — you have to imagine hundreds of thousands of kids feeling left out, alone, and less than their non-allergic peers.

According to Tonya Winders, president and CEO of the Allergy & Asthma Network, kids can also become a target. "[Bullying] can take very mild forms, like teasing or ridiculing or perhaps not being invited to a sleepover or birthday party, all the way up to being forced to eat a food that can cause a severe allergic reaction," Winders tells Romper. Lynda Mitchell, acting CEO of the Asthma & Allergy Foundation of America, notes that it's not just about peanuts, either. "Any type of food allergy for which a child is teased is food allergy bullying," she tells Romper.

Kids forcing other kids to eat a food that might kill them? That's shocking. What's even more surprising is that cruelty isn't limited to children. Parents also show tremendous insensitivity towards children with dietary restrictions. According to Winders, some of this is probably inadvertent — the result of a lack of understanding:

"Perhaps they exclude the child or make them feel alone, or offer only the food the child is allergic to ... If that’s the only food being served, then that child is going to be excluded."

Chris Falcon, founder of the non profit anti-bullying organization Take No Bullying, also notes the behavior of parents towards kids with allergies. He talks about a child not invited to a birthday party, because, as a parent said, "He's allergic to everything."

Why did this parent choose to exclude the child rather than provide an alternative food? How difficult would it have been to call the allergic child's parent, and ask what foods were safe?

"I personally think that society as a whole places less value on the feelings of others," Falcon explains. "I think we have been pulled so far away from having to connect with people that we have forgotten how to view people as human beings. Interactions over social media are the junk food of social interaction, and as mom would say ... too much junk food will make you sick."

Additionally, there's a lack of awareness about just how gravely serious food allergies can be. As a young teenager, Meg Connolly was allergic to lactose, poultry, meat, gluten, and soy. "People don't understand that you can't just take a pill or have an epi pen and eat whatever you're allergic to," she tells Romper. "I got made fun of constantly ... [People] would tell me I ruined their plans because we had to pick restaurants that had options for me." She was left out, ostracized, and accused of being anorexic. Teachers made no effort to help.

At 23, Connolly was diagnosed with endometriosis, which doctors think may have caused her allergies.

"My advice to kids going through this now is that they know their bodies better than anyone else," explains Connolly. "If people make fun of you for what you're allergic to, they're not worth your time or attention. If you have to consult a teacher and/or a parent to help you address the bullying issue, do it."

Over 80 percent of parents of children with life-threatening allergies believe their kids have been bullied, Kaléo found in a recent survey. Yet parents of kids without allergies don't believe there's a problem. Considering that two kids in every classroom suffer from a food allergy, school administrators and parent groups should be doing everything they can to raise awareness about what living with an allergy is like.

What about food allergies prompts such negative attention? While anything that sets kids apart from the norm can make them a target, food is an integral part of social life. Children celebrate with food, love food, hate food, and congregate around food. No Appetite For Bullying is determined that kids will no longer use food as fodder for cruelty, threats, or harm.