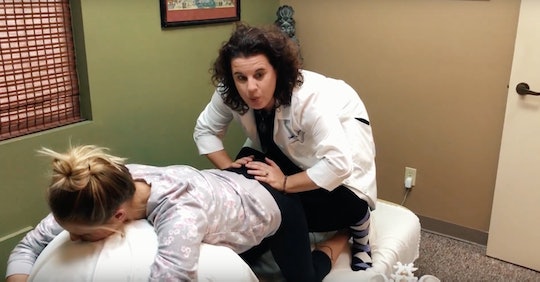 For Pain Relief During Labor, You May Want To Try The Double Hip Squeeze

The pain of labor is renowned for a reason: it's pretty excruciating. And while epidurals and other pain medications are awesome, not every woman wants to or can use them in labor. Luckily, Mother Nature has gifted women with countless ways to alleviate the pains of childbirth naturally, from body positioning to warmed up rice inside a heating pad. The double hip squeeze is one highly praised technique to reduce pain during labor, despite sounding like a wrestling move. In fact, some argue that every birth practitioner should know how to do a double hip squeeze during labor.

According to doula and childbirth educator Gail Janicola, a pregnant woman's pelvis is more flexible than it is in her non-pregnant state because of the hormone relaxin, which loosens the ligaments and joints in preparation for childbirth. Her sacrum, however — that triangular bone in the lower back between the two hip bones — is rigid. That means when the baby rotates and descends into the pelvis during birth, the result is often unbearable back pain. As if contractions weren't enough, Janicola says the stretching of the pelvis and pressure on the sacrum can equal or exceed the pain in your uterus.

"The double hip squeeze is a maneuver performed by a midwife or doula during labor to help relieve that pain in the pelvis and back," Janicola tells Romper. "It is usually executed with the laboring woman in an upright, leaning position, but it can also be achieved while she’s leaning over a stability ball or on her hands and knees."

So what does your doula or support partner actually do? Janicola breaks it down in detail. "Both hands are placed low on her hips covering the fleshy part of the buttocks, with thumbs toward the center, and the other fingers spread and pointing up and in at an angle," the founder of Moms on Top explains. "With the heel of your hands push and rotate in toward the center, and then up slightly. You can either hold the squeeze in the center throughout the contraction, or release and squeeze multiple times. You may need to shift the position of your hands to find the best spot."

So do you, the laboring woman, have a job to do here? Janicola says the double hip squeeze works best if you sway gently or rock back and forth while the pressure is applied. Not only is the motion soothing, but it also encourages your baby to rotate and descend. It's also important that you communicate the positioning that gives you the most relief, as well as the amount of pressure you prefer.

According to Janicola, the double hip squeeze works because the manipulation stabilizes the pelvis and frees the baby from pressing on the sacrum. Besides relieving pain, she says, an added benefit is that it can also free the baby to rotate more easily.

Another doula, Boston-based Hehe Stewart, says the only downside to this maneuver is that a laboring woman cannot perform it on herself. If you have hired a doula or have appointed your spouse or a friend to be your birth coach, make sure they know what to do when the time comes. And Stewart advises trying it out at different points of your labor, because the relief it gives will change depending on the baby's position.

"Sometimes this will feel good and sometimes it will not," Stewart tells Romper. "But it is something worth revisiting throughout labor, because even if it's painful at one point, it might be exactly what you need later when your baby is in a different position."