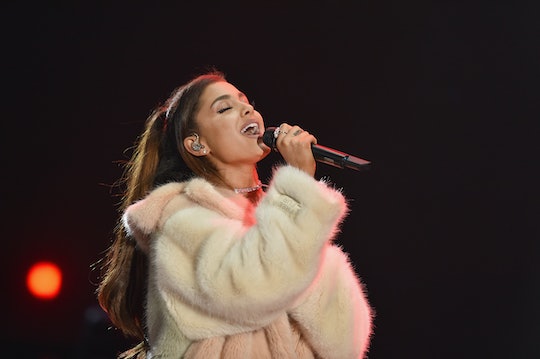 How To Donate During The Ariana Grande Benefit Concert

The attack outside of an Ariana Grande concert in Manchester, England less than two weeks ago, which killed 22 people and injured dozens more, was absolutely devastating. The aftermath from the concert and hearing the stories of the victims has been absolutely heartbreaking, but even with another terror attack (this time in London) fresh on everyone's minds, there's still a glimmer of hope. On Sunday, Ariana Grande and dozens of other musicians will come together for a benefit concert to raise money for the victims of the attack. And for those wondering how to donate during the Ariana Grande benefit concert, the answer is thankfully simple.

Five days ago, Grande, along with the British Red Cross, announced that she would be returning to Manchester with a bevy of celebrity musicians to raise money for the victims of the attack and inspire hope. The concert will air live from Manchester Sunday afternoon at 2 p.m. Eastern Time in the United States on Freeform; It will also be available to stream online. But you don't have to be in attendance or even tune in to donate to the victims of this harrowing attack. There are plenty of ways to donate during the Ariana Grande benefit concert on the go or away from your TV or computer.

Grande fans (or people who just really like music) can visit the iTunes store and download the recently re-released single for Grande's benefit song, "One Last Time." All of the proceeds from each sale of the $1.29 single will be donated to the We Love Manchester Emergency Fund.

If you're looking to show your unwavering support for those affected by the attack, you can proudly do so by purchasing One Love Manchester merchandise online. There is a wide selection of shirts, sweatshirts, and other merchandise available to purchase ranging from $5 to $40. The best part is, the net proceeds from the sale of the merchandise will be donated to the We Love Manchester Emergency fund. This is a great way to donate to the victims of the attack and receive a little something in return to remember them.

Donate Directly To The We Love Manchester Emergency Fund

All proceeds raised from the benefit concert will go to the We Love Manchester Emergency Fund, which was set up through the British Red Cross. But if you don't want anything in return for your donation and are just simply looking to give to the victims, no questions asked, you can do so by visiting the website for the British Red Cross.

You can also donate money to help the victims through Ariana Grande's Facebook page during the live stream. So far, through Facebook, Grande and her fans have raised over $6,000 together. For those watching the concert livestream on Facebook, this is the perfect way to donate without ever having to look down from the screen.

According to AdWeek, during the live stream at 2 p.m. Eastern Time, fans will be able to donate through Twitter by liking or retweeting the tweet containing the live stream from the Team Ariana Twitter account. These actions will "trigger an auto-reply containing a donation link" where fans can donate money direct from Twitter.

With so many amazing artists giving back by performing in this concert, fans should be inspired to donate and help the victims any way that they can. It's simple enough, after all.