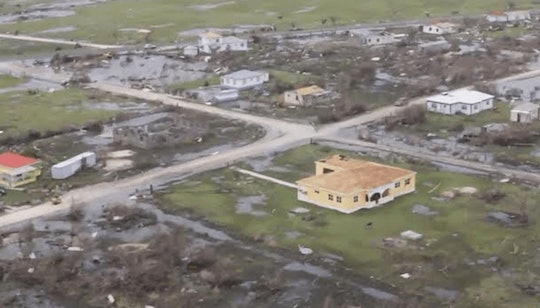 On Wednesday, Hurricane Irma tore across much of the eastern Caribbean, leaving catastrophic devastation in its wake. Hardest hit was the tiny island of Barbuda, where the eye of Hurricane Irma made landfall. No amount of emergency readiness could have prepared Barbuda for what has become the strongest Atlantic storm in weather history. Antigua and Barbuda Prime Minister Gaston Browne told the Associated Press that 90 percent of Barbuda's structures have been destroyed by Hurricane Irma. Here's how to donate to Barbuda relief efforts, because the island has been left in near unimaginable ruin.

Browne also said that 60 percent of Barbuda's population of roughly 1,400 people has been left homeless by the Hurricane Irma. He also confirmed that a 2-year-old child had died as a family sought to escape their damaged home. After surveying the island, Browne said that nearly every building on Barbuda has suffered damage from Irma. "Either they were totally demolished or they would have lost their roof,” Browne said. “It is just really a horrendous situation."

Actor Robert De Niro has pledged to help Barbuda rebuild along with several local relief organizations, according to Deadline. The 74-year-old actor co-owns a resort on the island. De Niro's pledge is certainly admirable and Barbuda needs every dollar anyone can donate, as rebuilding Barbuda will take years. Here's how you can help.

Save The Children has already deployed relief response teams to the Dominican Republic and Haiti, and will continue to facilitate relief efforts throughout the entire region affected by Hurricane Irma. Donate to Save The Children online.

As a recognized member of the International Red Cross, the Antiqua and Barbuda Red Cross has already deployed assessment teams to the island, according to its Facebook page. While its website appears sparse, the Antigua and Barbuda Red Cross is a legitimate organization collecting funds to help the victims of Barbuda affected by Hurricane Irma. Donate to the Hurricane Irma Relief Fund here.

Like Save The Children, UNICEF is committed to helping children and families in the wake of disaster. According to its Twitter account, UNICEF is focusing on providing drinking water and sanitation to families and children. Donate to UNICEF's Hurricane Irma relief efforts online.

The UNPF provides unique aid that most don't think of in the immediate wake of a natural disaster: Access to safe reproductive health. According to The Antigua Observer, UNPF will provide "dignity kits" to women and girls in Barbuda, that include basic items such as sanitary napkins, soap, and underwear. Donate to UNFP online here.

This charity, registered in Antigua and Barbuda, exists solely to raise funds for the state's neediest and most vulnerable. It has set up a Barbuda Relief Effort donation portal at its website.

TickeTing is an Antigua-based events app developer. It has set up a dedicated fundraiser for Barbuda via its app: Simply download the TickeTing app for your phone and click the Barbuda fundraiser to contribute. All funds will do directly to Barbudans, according to the company's Twitter.

With Hurricane Jose — now a Category 2 storm — set to bear down across Barbuda and Antigua this weekend, an already-destroyed island can't afford yet another major disaster, so every single contribution you can make helps.