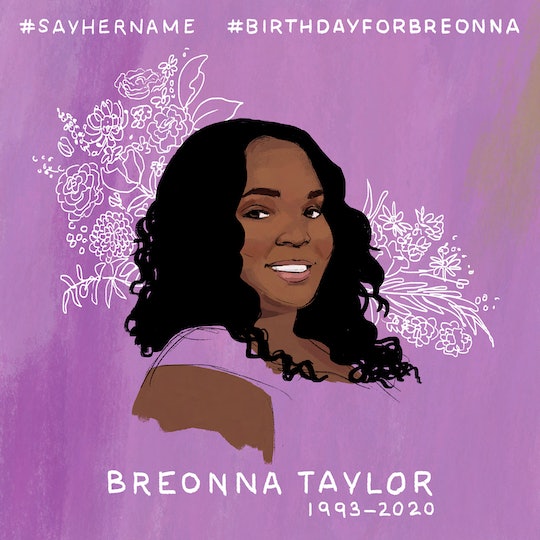 Breonna Taylor should be celebrating her 27th birthday today. Instead, on June 5, 2020, the nation is marching and calling for justice three months after she was fatally shot by police in her apartment. Like most 20-somethings, the young EMT had plans — but her life was cut short by police. That is an unfair and infuriating reality that can't be undone, but you can help ensure her memory lives on — especially today — by donating to Breonna Taylor's family and joining their fight for justice.

You can send your support by donating directly to Taylor's family on their official GoFundMe page, which was started by Taylor's aunt, Bianca Austin. "We're not stopping until we truly get justice!" Austin wrote on GoFundMe. "All of you are such a blessing! It's amazing!" So far, the GoFundMe has raised over $2.6 million.

"We are thankful for the offers for donations. My sister and niece are too proud to say it, but this is a tough fight and it does take a toll. They’re both hard workers and they’re missing out on some work (and sleep!) in this fight for justice," Austin wrote. "We do not expect anyone to donate to this cause; your voices are being heard and that alone is so powerful!"

Taylor, 26, was shot and killed on March 13 by police officers in her Louisville, Kentucky apartment. When officers entered her home on March 13, Taylor's boyfriend, Kenneth Walker, reportedly fired one shot from his licensed firearm in self-defense, ABC News reported. According to The New York Times, police had obtained a "no-knock" warrant as part of a reported narcotics investigation, allowing them to enter her home without warning at midnight. The Louisville Courier Journal reported that Taylor was not the main target of the investigation and no drugs were found in her apartment. She was shot at least eight times and died in the hall of her apartment.

Taylor's mom Tamika Palmer told the Louisville Courier Journal that her daughter, who was working as an EMT when the coronavirus pandemic hit, had plans for the future. "She had a whole plan of becoming a nurse and buying a house and then starting a family," she told the newspaper. "Breonna had her head on straight, and she was a very decent person. She didn't deserve this. She wasn't that type of person."

While a monetary donation is one way to help her family during during this difficult time, there are other ways you can show your support. For instance, in addition to flooding "social media with love and remembrance for Breonna," writer and culture critic Cate Young has also suggested sending a birthday card in Taylor's memory directly to the offices of the Kentucky Attorney General, Daniel Cameron, calling for charges to be made against the officers who forced their way inside her home.

Another way to show you support? Sign the following petitions:

And if you're able to donate your time, you can also join a Black Lives Matter protest happening in your area and use your voice to speak out against racial injustices and police brutality. You can also donate money to the Louisville Community Bail Fund here to support protestors in Louisville who are on the ground, demanding justice for Taylor.

"Breonna, she was a great person," Taylor's mother said of her daughter on the Justice for Breonna petition. "You don’t like to call people perfect, but she really was perfect. She did everything right as far as trying to be a kid coming into an adult life. She loved to help people, she loved to be around family. She loved life and she was just figuring hers out. She was just getting started."