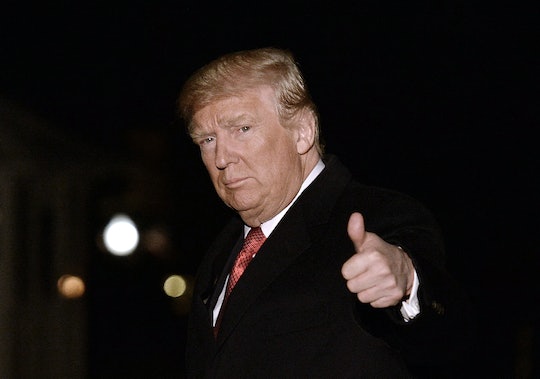 How To Donate To Meals On Wheels After Budget Cuts

President Donald Trump's administration revealed his budget on Wednesday, and frankly, it's horrifying. Trump plans to cut funding for around 50 programs, including one that provides food and care for senior citizens. Now, people are looking into how to donate to Meals on Wheels, as the hashtag #LetThemDie trends on Twitter. Even Marie Antoinette was better than that. The plan would also slash funding for Energy Star, the National Endowment for the Arts, the Corporation for Public Broadcasting, the Low Income Home Energy Assistance Program, and many other essential services, according to the Washington Post.

The tragically ironic point (should we create a new word for that increasingly common situation?) is that Trump was elected in no small part thanks to the senior citizen vote. In addition to the Meals on Wheels cut, his proposed health care plan — the only thing in the world he's ever hesitated to put his name on — would cause seniors to spend more that half of their income on insurance premiums. And that figure comes from Fox News, the most pro-Trump outlet that can still technically be considered news. Forget the old adage of biting the hand that feeds him; this is more like tearing that hand off completely, then chucking it into a dumpster fire. The White House has not responded to Romper's request for comment regarding why the Meals on Wheels program is being cut.

The severe budget cuts are being proposed with a goal of funding a $54 billion increase in defense spending. For perspective, U.S. military spending is already at nearly $600 billion, which is far more than any other country. It's nearly three times what China, the runner-up, spends annually, and it accounts for more than half of all federal discretionary spending, Veterans' benefits, by comparison, account for only $65 billion. Want more perspective? The Trump family's New York City Secret Service detail is estimated to cost taxpayers $50 to $60 million per year, since the president's wife and son don't live with him. And remember how often Trump furiously tweeted about President Obama's golf vacations? Trump's taken five during his eight weeks in office, costing the nation about $3 million each time. Granted, they are working vacations; Trump takes national security calls on what's presumed to be an unsecured phone while surrounded by his country club members.

Of all the budget cuts, the decision to defund Meals of Wheels may be the most severe and, many have argued, the most heartless, yet. In addition to providing nutritional meals to housebound seniors with limited mobility, the program provides food delivery for companion animals, home repair services, transportation for doctor appointments, and simply phone calls to check in on 2.4 million seniors a year. One in six American seniors are threatened by hunger, and one-quarter of them live alone. The least we can do is keep them fed, and make sure they stay alive. You can donate to Meals on Wheels on their website, and if you have some spare time, volunteer to help seniors in your area. If the federal government will no longer help them, someone should.