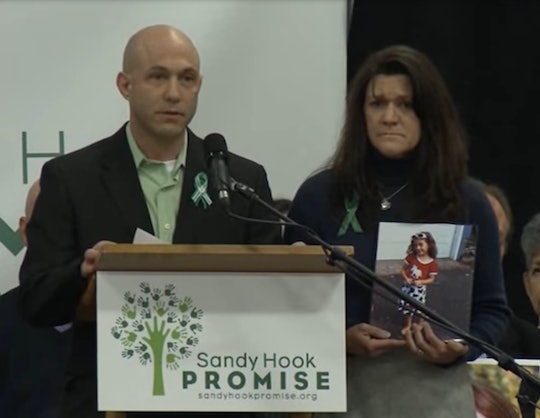 On Monday, the nation learned the devastating news that Jeremy Richman — the father of Avielle Richman, a victim of the 2012 Sandy Hook shooting — had reportedly died by apparent suicide, according to the Hartford Courant. News of Richman's death comes as a heartbreaking shock; days after his daughter's tragic death, Richman and his wife, Jennifer Hensel, co-founded a foundation in honor of Avielle — The Avielle Foundation. In the years following the mass shooting, they became advocates for mental health and violence prevention. As the nation and those close to Richman mourn his loss, you can donate to The Avielle Foundation and continue to help "building compassion" as the organization has aimed to do.

Richman died at the age of 49, as the Hartford Courant reported. Many took to social media to share their condolences and Newtown First Selectman Daniel Rosenthal told the newspaper in a statement, "I don’t want to speculate as to why Jeremy took his life, except to say none of us can fathom the enormity of loss he carried with him after the death of his beautiful daughter, Avielle."

Avielle — who was 6 years old at the time of the horrific shooting — was one of the 20 students and six adults killed in the Sandy Hook massacre on Dec. 14, 2012, according to CNN. In the years after Avielle's death, Richman and his wife had "poured themselves" into the foundation they created in their daughter's honor, as NPR reported in 2017.

The Avielle Foundation advocates for mental health research into the reasons why some people turn to mass violence. On the foundation's website, they list several reasons to this kind of work is necessary, including the statistics that 50 percent of the world’s children are victims of violence annually and one violent crime occurs every 27 seconds in the United States. The foundation's mission reads:

The Avielle Foundation has been created in honor of our loving daughter — along with all the others who fall victim to violence — to foster an understanding of what leads someone to engage in harmful behavior, the risk factors, and conversely to identify and engender protective factors that lead away from violence and toward compassion, kindness, connection, community, and resilience. We are working with world leaders in four broad areas: brain health research, public health, community engagement, and education.

To give to the foundation, you can make a direct donation of any amount online. Though you need to enter your name and basic information, you can check a box to make the donation anonymous if that is your preference. If you prefer to not donate online, you can also mail a check made out to The Avielle Foundation to P.O. Box 686, Newton, Connecticut, 06470.

The Avielle Foundation also accepts pledges, which help non-profit organizations with their budgeting process, so if you’d like to pledge to give there is a link online to fill out the form. The foundation notes that you can also call Nick Hoffman at 203-491-2876 to give pledge information.

Richman was a researcher for a pharmaceutical company when he lost his daughter, the Hartford Courant reported, and he ultimately left his job to dedicate himself to the foundation and its invaluable, important work.

"We want to bring about changes that will stop a tragedy such as this from happening to any community ever again," Richman said in 2013 during a event for Sandy Hook Promise, a nonprofit that trains students and adults to know the signs of gun violence. "[My wife] and I believe that as citizens of any community it is our responsibility to be outraged... Beyond that, we need to face and take action on hard issues."

More Like This
Can States Ban The Abortion Pill? FDA Rules May Make That Hard
Elmo Talks About Getting His Covid Vaccine In A Cute New Video
You Can Schedule Your Kid’s Covid Vaccine Appointment At Walmart
This Map Illustrates Just How Many States Would Ban Abortion If Roe V. Wade Is Overturned