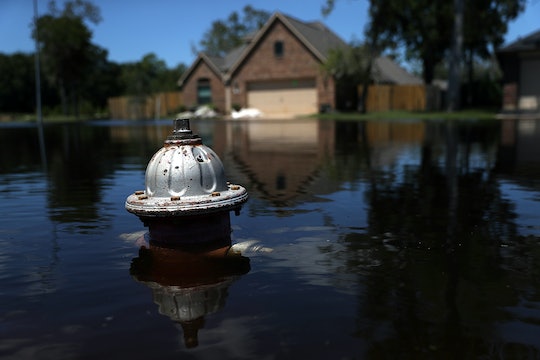 Here's How You Can Donate During The Hurricane Harvey & Irma Telethon

The devastation caused by Hurricanes Harvey and Irma has been on the minds of many for the last few weeks. Though Harvey may technically be over, those affected now have to begin the long process of rebuilding in the face of so much loss; Irma is still raging, resulting in even more displacement and destruction. The September 12 telethon Hand in Hand: A Benefit for Hurricane Relief seeks to raise funds to help the people dealing with all of this, and those able to donate may be wondering how to donate to the telethon for Hurricanes Harvey and Irma.

The telethon will be available to watch in several different ways, so you truly can't miss it. If you'd rather tune in on TV, then you have countless networks to choose from: CBS, NBC, Fox, ABC, Oxygen, Bravo, E!, MTV, CMT, and HBO. If streaming works better for you, then you have options there as well; it will stream on YouTube, Twitter, and Facebook, as well as AOL, Apple Music, The Huffington Post, and Yahoo!. But watching is only half the battle. To donate, viewers can either call in to the telethon (the number will be on screen), text, or travel over to the Hand in Hand website and donate online.

Hand in Hand will then distribute funds to different charities to benefit victims of Hurricanes Harvey and Irma. That includes the Mayor's Fund for Hurricane Harvey Relief, Habitat for Humanity, Save the Children, United Way of Greater Houston, Feeding Texas, Feeding Florida, Direct Relief, the ASPCA, and the Rebuild Texas Fund. While initially the telethon was set up to provide relief for Harvey, the threat of Irma could not be ignored. Billboard reported the organization released a statement that explained they had made arrangements to include those affected by Irma as well, in which they said they were "prepared to help in any way we can."

The telethon will also feature appearances by more than a few celebrities, both manning the phones and performing. Beyoncé, Barbra Streisand, The Black Eyed Peas, Drake, Kelly Rowland, and Black Shelton will be there (to name a few) but also count on seeing actors George Clooney, Robert De Niro, Jamie Foxx, Oprah Winfrey, Leonardo DiCaprio, Reese Witherspoon, and Julia Roberts, among others.

Whether they lost people or they lost homes, or whatever it may be, if you can do something, you should. My hope is that, with this, we inspire people in our industry and in other industries to do something also.

Manager Scooter Braun organized the event, and he spoke to Entertainment Weekly about his desire to help. "Whether they lost people or they lost homes, or whatever it may be, if you can do something, you should," he said. "My hope is that, with this, we inspire people in our industry and in other industries to do something also. During this time, when there's so much division, we need to fight back with action and unity... This is bigger than Texas, this is bigger than Florida. We want to come together as a nation and believe in the idea that we all signed up for, that when things get touch, we stick together."

The telethon is one way to lend monetary support to the people affected by the hurricanes, but it's not the only way. Those looking to help out can go directly to one of the websites of the charities Hand in Hand will be distributing money to, or seek out other options. There are many different ways to help out if you're able to do so, and the support is sure to be appreciated by the people who need it.