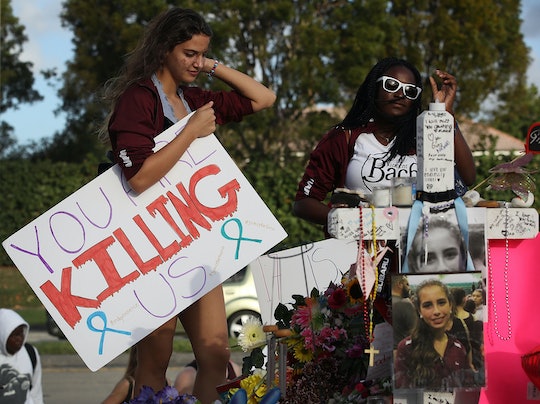 How To Donate To The March For Our Lives Protest, Because Enough Is Enough

Last week, a gunman opened fire at Marjory Stoneman Douglas High School in Parkland, Florida, killing at least 17 people and wounding dozens of others, according to news reports. The Gun Violence Archive lists the Parkland incident as one of more than 30 mass shootings that have happened in 2018 so far. But the teen survivors of last week's deadly attack have decided enough is enough, and organized a nationwide protest to demand stricter gun laws. Looking to help? Here's how to donate to the March For Our Lives protest, because they can use all the help they can get.

The easiest and best way to donate money to the March For Our Lives movement is through its GoFundMe page. Survivor Cameron Kasky, a student at Stoneman Douglas High School, created March For Our Lives "to demand that their lives and safety become a priority, and that we end gun violence and mass shootings in our schools today," according to its website. "Every kid in this country now goes to school wondering if this day might be their last. We live in fear," the March For Our Lives mission statement reads. "It doesn’t have to be this way. Change is coming."

The teen survivors behind March For Our Lives hoped to raised $1.5 million initially for the protest, which takes place in Washington, D.C., and in cities around the country on March 24. As of Tuesday, they raised more than $945,000 of that original goal. But, after a few big-name donations, March For Our Lives has raised nearly $2.2 million as of Friday. The nationwide rally is more than on its way to making the organizers' new fundraising goal of $2.5 million.

Kasky, who also created the #NeverAgain movement, wrote on the March For Our Lives GoFundMe page,

The funds will be spent on the incredibly difficult and expensive process that is organzing [sic] a march like this. We have people making more specific plans, but for now know that this is for the march and everything left over will be going to the victims' funds.

A number of celebrities have decided to throw their weight behind March For Our Lives. Earlier this week, Oprah Winfrey made a $500,000 donation to the upcoming protest, following in Amal and George Clooney's footsteps, according to Refinery29. Winfrey announced her decision to help fund March For Our Lives in a tweet posted Tuesday, writing,

These inspiring young people remind me of the Freedom Riders of the 60s who also said we’ve had ENOUGH and our voices will be heard.

George and Amal Clooney first announced on Tuesday that they would make a $500,000 donation to March For Our Lives in the names of Alexander and Ella, their 8-month-old twins, according to CNN. The powerhouse couple, who plan to attend the march on March 24, said in a statement that they wanted to "help pay for this groundbreaking event" because they were "so inspired by the courage and eloquence of these young men and women from Stoneman Douglas High School," CNN reported.

Winfrey and the Clooneys aren't the only big names to throw money and support behind March For Our Lives. Hollywood executives Jeffrey and Marilyn Katzenberg also made a $500,000 donation, as did Steven Spielberg and Kate Capshaw, according to Deadline.

But you don't have to be a celebrity to help fund March For Our Lives, nor to demand tighter gun laws that can prevent tragedies like that in Parkland, Florida or Newtown, Connecticut. If you can't find your way to a March For Our Lives protest on March 24, consider adding your name to the list of donors. Every penny counts when you're trying to save lives.