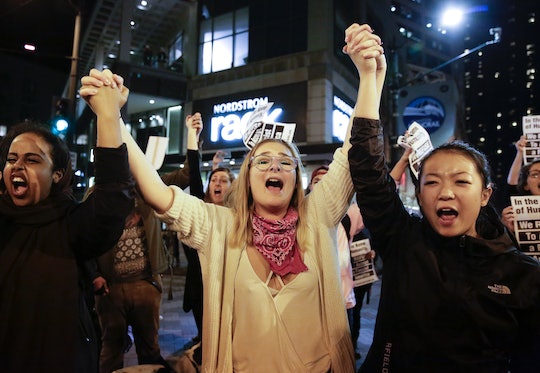 In the wake of Donald Trump's improbable victory in the presidential election, donations to various groups pledging to fight the president-elect's oppressive policies have surged. For example, the American Civil Liberties Union has raised a record $7.2 million from roughly 120,000 individual donors since last week, and also added 150,000 new people to its email list — calling it "the greatest outpouring of support for the ACLU in our nearly 100-year history, greater than the days after 9/11," according to Fast Company. As the widespread devastation over the election results shows no signs of dissipating, knowing how to donate to women's organizations can provide you with a small semblance of comfort, not to mention make a tangible difference in the lives of some of our most vulnerable populations.

Anticipating what Trump's presidency will mean for women — based on his comments on the campaign trail as well as the Republican Party platform finalized this past summer — paints a decidedly ugly picture. Here's a smattering of what women can expect under President Trump:

Instead of simply voicing our anger on social media, let's put our money where our mouths are. Think about joining the fight for women's rights by making a contribution to one or more of these organizations:

Founded in 2003, the National Center for Transgender Equality is devoted to ending discrimination and violence against transgender people through education and advocacy. To advance life-saving change for transgender people, make a tax-deductible contribution on the organization's website.

For more than 20 years, the Center for Reproductive Rights has worked to protect reproductive freedom as a fundamental human right all governments are legally obligated to protect. Make a one-time or recurring monthly gift to CRR on its website.

Lambda Legal is a national organization committed to achieving full recognition of the civil rights of lesbians, gay men, bisexuals, and transgender people, and those with HIV in the areas of employment, immigration, health care, and more. Visit Lambda Legal's website to make a one-time or recurring monthly contribution.

Made up of pro-choice women (and men) across the United States, NARAL Pro-Choice America works to protect and expand reproductive freedom — and it doesn't intend to stop under Trump's future presidency. Join NARAL in the fight for choice by making an online donation.

The National Women's Law Center champions policies and laws that help women and girls achieve their potential at school, at work, at home, and in retirement. Your donation to NWLC will help overcome the challenges facing women and families now and in the future.

Simply put, Equality Now is dedicated to creating a world where women and girls have the same rights as men and boys. Now that's something everyone can get behind, right? Do your part to help women and girls reach their full potential — make a donation to Equality Now online.

The National Network of Abortion Funds helps remove financial and logistical barriers to abortion access. Given Trump's plan to appoint anti-choice justices to the Supreme Court in hopes of eventually overturning Roe v. Wade, it's more important now than ever to help other women access the health care they need. Donate to NNAF online today.

If you're unable to contribute funds, many of these organizations are also seeking volunteers. However you choose to lend a hand, don't let Trump's election silence you — his administration will likely try to do that on its own.