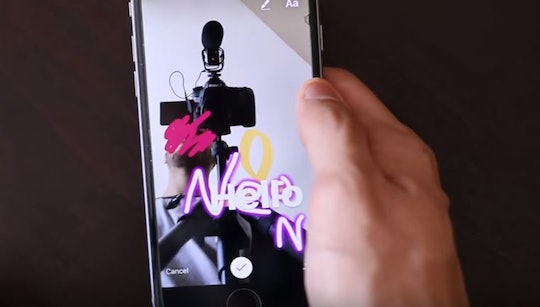 According to The Guardian, this is the fifth product Facebook, which owns Instagram, has launched to compete with Snapchat, after first trying just to buy the company. Snapchat turned down a reported $3 billion dollars from Facebook. The Guardian said Instagram Stories comes after failed Snapchat knock-offs Poke, Slingshot, self-destructing Messenger videos, and even a version of Messenger than enabled what The Guardian called "encrypted conversations."

None of those seemed to be the solution to competing with Snapchat, so now the company is trying Instagram Stories.

Arguably one of the best features in Snapchat is the ability to draw over your videos. Instagram Stories offers a similar feature. How do you pull off the doodle? Here's how.

First, build your story by tapping the plus sign. You can find it in the upper left of the screen, according to HubSpot. Then take your photo or video. After you have your story, there will be three pen options. Select the one you want and doodle away!

The Instagram Stories doodle functionality is being well received by at least some of its users.

And these tweeters aren't alone. Instagram Stories, despite being a total Snapchat copycat, is getting rave reviews for improving Snapchat's clunky and confusing user interface.

"Instagram Stories have all the fancy drawing features you’d find on Snapchat, but less buttons and options to get in the way of actually sharing your photos – like the very first version of Snapchat back in the day," Owen Williams wrote for The Next Web. "To reduce confusion Stories focuses on obvious, labeled buttons instead of swipes and offers information on where you are exactly in the app right now. There’s always context for what you’re looking at and where to go next, something that’s frequently lost in Snapchat."

So maybe Instagram Stories is destined to be a huge hit.

With Instagram Stories, you don’t have to worry about overposting. Instead, you can share as much as you want throughout the day — with as much creativity as you want. You can bring your story to life in new ways with text and drawing tools. The photos and videos will disappear after 24 hours and won’t appear on your profile grid or in feed.

Here's more on how to use the new Instagram Stories.

Stories, Instagram says will be released worldwide over the next few weeks.