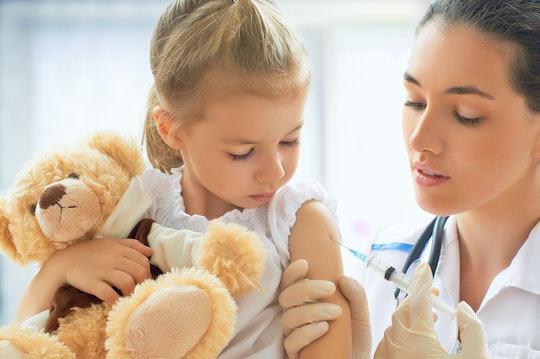 Here's How To Make Vaccines Less Scary For Your Kid, According To Science

I'm a big believer in getting a yearly flu shot (it literally saves lives, and no, it definitely won't give you the flu), but even though I made sure to get my own shot promptly at the beginning of the season, I have been seriously dragging my feet when it comes to vaccinating my 4-year-old twins. Both of them are afraid of needles, and my daughter, who has some additional health complications that have made her quite anxious around doctors and in hospitals, is especially terrified. Afraid of making it worse, I've been putting it off, but it turns out that researchers out of Canada's York University might have found a solution. Wondering how to ease your child's fear of needles? Here's what science has to say about it.

According to Science Daily, the study's senior author was Dr. Rebecca Pillai Riddell, who runs the university's Opportunities to Understand Childhood Hurt (O.U.C.H.) Laboratory, and who has studied a cohort of 548 children for over a decade in an attempt to better understand pain responses during childhood vaccinations. The latest study, led by graduate student Lauren Campbell, looked specifically at predicting different factors that could influence the amount of pain a child felt during and after vaccination, and in October, the findings were published in Pain, the journal of the International Association for the Study of Pain.

What they found was that the children with better coping skills under times of stress experienced less pain overall — but that those coping skills needed to be encouraged by parents before and during the shot. The children who felt less pain, for example, were the ones who had parents there to "[engage] in coping-promoting behaviors like encouraging a child to take deep breaths," while others offered up a phone or iPad as a distraction, or simply engaged them in conversation about something positive, like what they were going to do after the appointment.

But what is likely just as important as what parents do ahead of and during vaccination appointments, is how they act. Parents' behavior during medical appointments had a big effect on the child's pain experience — both in the moment, but during future vaccinations as well. As Dr. Pillai Riddell explained to CBC News, "How they reacted [at 12 months], we can predict years ahead of time part of how they're going to react after a needle when they're preschoolers." In other words, like many kids, my 4-year-olds' fears have likely been brewing for years (and, uh, it's probably my fault).

Another well-meaning and common mistake? Unwittingly using "distress-promoting" behaviors in an attempt to ease your child's fears. We often try to reassure our kids by telling them "it's OK" or "don't worry," in the hopes that they'll feel less afraid, and we really are trying to be loving and understanding. But often times, the repeated verbal reassurance just comes across as reinforcing the parent's own anxiety; the child might think, "Mom keeps telling me I'll be OK, which means I should probably be worried that I might not be."

Nervous parents are also going to want to avoid piling on the empathy during potentially painful situations. While it might seem like it would help to say things like "Oh, I'm so sorry that you're scared," or "I wish Mom could do the needle for you," researchers found that those comments just made children more afraid, and that the whole experience was much more miserable.

So what can nervous parents like me to do help their even-more-nervous kids when it's time to get a shot? Pillai Riddell suggests that parents be honest and factual — yes, the needle may hurt a little bit, but it will be over very quickly and then you can go get a lollipop/sticker/ice cream/whatever (and maybe a Xanax for mom?). When preparing for the shot, parents should "[hold] the child close" for comfort (and safety), but more than anything, the most important thing parents can do is to find a way to project calm and confidence themselves. That might be easier said than done (just thinking about taking my kids for their flu shots turns my stomach), but as Pillai Riddell noted "children, especially young children, pick up on [parental] distress and that makes them more distressed."

Dr. Anna Taddio, a pain researcher at The Hospital for Sick Children in Toronto, Canada, has also developed some helpful techniques for reducing immunization pain in children, which she's shared both online and in a video on YouTube. Taddio's tips? First, be prepared. Talk to your doctor ahead of time about your desire to minimize pain as much as possible, to make sure they are on board. In children 4 years old or older, Taddio says talking about what's going to happen — but sticking to the facts. That might mean saying things like, "the doctor is going to use a needle to give you a vaccine in your arm and it might feel like a little pinch," and "the medicine you get will protect you from getting very sick." It also helps to let them know what you'll be doing to make it easier: "we are going to play a game so that you won't notice the needle very much." (Another helpful distraction technique? Blowing bubbles. It's fun and it encourages deep breathing.)

Other recommendations? Try using an over-the-counter anesthetic cream ahead of time, which can ease pain from the needle itself. Again, holding your child in your lap is a good idea, as is rubbing your child’s arm (an area away from the injection site) before, during, and after the vaccination. Though it might not seem like much, Taddio explained that the rubbing "will compete with the pain experienced from the needle [and] help to lessen your child’s perception of pain."

Of course, needles are a common fear in childhood, and one that most people eventually grow out of. But given the importance of vaccination, anything that can ease the fear and anxiety surrounding needles is really, really valuable. So once I finally gather the nerve to bring my kids to the doctor, I'll remember to come prepared: numbing cream, iPhone loaded with kid-friendly apps, a promise of a post-flu-shot ice cream cone, and the best possible poker face I can possibly summon.