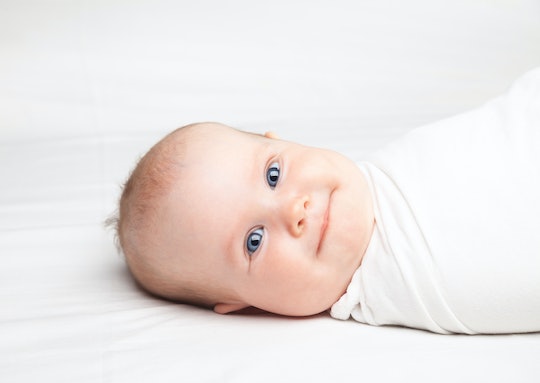 It's 3 a.m., your first night home from the hospital, and now you need to know how to expertly swaddle your baby. He's nursed, changed, and all that's standing between you and zonking out until the next feeding session is remembering your nurse's wrapping lesson. But through your bleary-eyed exhaustion, you just can't figure out how to get your crying baby bundled up again so you can lay down. What are you supposed to do?

Comforting infants with swaddling is a practice that dates back centuries, but has fallen in and out of favor several times of the course of history. In the United States, it regained popularity in the 1990s when pediatricians started recommending that babies sleep on their backs to prevent Sudden Infant Death Syndrome (SIDS) because it restricted them from initiating their startle reflex during sleep. According to a 2005 New York Times article, as many as 70 percent of infants in the U.S. slept on their stomachs in 1994, a statistic that changed rapidly by 2002, when only 11.3 percent of American infants were tummy sleepers thanks to the Back To Sleep campaign spearheaded by the U.S. National Institute of Child Health and Human Development.

The babies, in turn, like being restricted by the tight wrap because it mimics the security of their mother's womb where they had very little room to move, noted Baby Center. So think of wrapping a swaddle as hugging your baby to sleep.

But if you're still panicked while trying to figure out how to swaddle your baby, never fear. There's a video from YouTube user travelwithnicole that teaches you three nurse-approved swaddling techniques to get your baby wound up snug-as-a-bug and both of you dreaming for a few hours. I mean, it will probably have to wait until morning, but then you have all day to practice. And while the wraps may seem advanced, considering that most parents go with the super-easy simple swaddle or burrito swaddle, these secure methods will transport your little one back into the womb where they were warm and as close to mama as they could possibly be.

In the video, nurses walk parents through their preferred methods of wrapping up newly sprung infants. All three are very upbeat and eager to teach, though once or twice you can almost hear them thinking "No, you dummy" when a parent or two asks a totally innocent question. Funny and informative.

Another bonus to swaddling is that, according to the American Academy of Pediatrics, bundled babies have better quality sleep because they can more easily enter a REM cycle without startling themselves out of slumber. The result is more sustained sleep through that brutal period when they wake up every one to three hours, so everyone is able to capitalize on those little cat naps until your little one's sleep patterns even out around 3 or 4 months of age.

Once you watch the videos, be sure to follow a few safety recommendations. First, do not straighten your baby's legs inside the wrap. According to the International Hip Dysplasia Institute, an infant's legs are naturally springy from being cramped inside their mother's body through pregnancy, so positioning them into a standing position inside a swaddle is a recipe for hip dysplasia. Also, a swaddle helps keep baby warm in the first few days after birth when they can't regulate their own temperature yet, but at home you should keep them from overheating by watching for sweating, damp hair, and rapid breathing, and using light wraps.

Of course, it takes a little practice to discover the blankets you like best, but we're confident you're smart enough to snag a few of those breathable, clingable hospital blankets to make it easier on yourself while you experiment. And if all else fails, get a Halo Sleepsack Swaddle and call it a night.