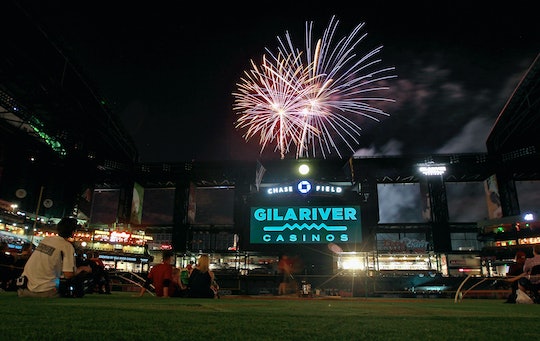 How To Explain Fourth Of July To Your Kids

Independence Day is coming up soon, which means you're probably loading up on hot dogs and beer, and figuring out how exactly to get the best spot at the fireworks. (There's no way Dave and his big head are going to block your view again this year!) But if you're a parent, your kids may have some questions about the meaning of the holiday. And explaining the Fourth of July to your kids provides a great opportunity to look at how America's past informs America's present, what makes our country unique, and what we can do to make it even better.

A fun way of presenting the holiday to your kids might be to explain that the Fourth of July is basically a big old birthday party for our country. In case you yourself need a refresher on the history, we celebrate the Fourth of July because, back in 1776, that's the day that the Continental Congress declared independence from Great Britain by approving the Declaration of Independence. Of course, we then had to fight an ugly war to have Great Britain recognize that independence, which makes the bravery of declaring it all the more worthy of celebrating.

John Green, author of The Fault In Our Stars and generally wonderful nerd human, has a great video on the holiday's history, in case you want to supplement your own talk with a fast-paced explanation that includes lots of jokes about things blowing up.

It's important to discuss with your children the founding principles of the country, namely that "all men are created equal," and that we all have "certain unalienable Rights" like "Life, Liberty, and the pursuit of Happiness." You can talk with them about the ways in which they demonstrate those rights every day, and how the government protects (or is supposed to protect) those rights. You can even go back to your school days and show them this fun (but dated—more on that in a bit) Schoolhouse Rock! video so that our rights will get stuck in their heads forever and ever:

Of course, that Schoolhouse Rock! video inadvertently points out some of the problems with our country's founding, problems that continue to reverberate today. First of all, let's just acknowledge that "the pursuit of happiness" is demonstrated in the video, multiple times, by a dude chasing a woman who is literally running away from him, which I guess was supposed to be funny? Also, unsurprisingly, there's no mention of African-Americans and the particular injustice they faced.

When I learned about Independence Day in elementary school, my teachers neglected to tell me that many of the Founding Fathers were slaveowners. It's easy to talk only about the good side of the Fourth of July to your children, but I think it's important to acknowledge that the equality and freedom mentioned in our country's founding only applied to white men and that, though we've made great strides, we're still not truly equal.

So when explaining the holiday, make sure to discuss the ways in which your children can work to further the principles laid out in the document we celebrate, whether by getting involved in the upcoming election or in some other way.

Then, go forth and barbecue.