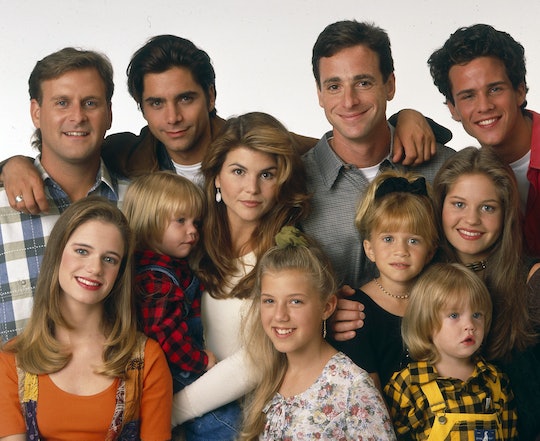 Well, you start with the beginning of course! (Or, in this case, with the plot.) Full House was set in San Francisco and follows the life of news anchor Danny Tanner. The show begins just after the death of Tanner’s wife and centers around his family, i.e. how the heck is Danny Tanner going to raise three little girls — D.J. (10), Stephanie (5), and Michelle (just 10 months) — on his on his own? And, in traditional sitcom fashion, Tanner takes care of his family in the only way he knows how: by recruiting his childless brother-in-law, Jesse Katsopolis (a rock musician), and very childless best friend Joey Gladstone (who works as a stand-up comedian) to help raise his daughters.

But, plot aside, here are the other essential Full House facts your kiddo needs to know.

Exactly How Many People Live In That Narrow Row Home On Broderick Street?

By Season 5, there are four Tanners, four Katsopolises (Uncle Jesse gets married, and he and Aunt Becky welcome twins), one Gladstone, one dog and one, um, Gibbler. Kimmy Gibbler that is. (OK, the truth is Gibbler doesn’t live in the Tanner home, but she is always there so, yeah, she basically counts as a resident, at least IMO.)

Who, Or What, Is Kimmy Gibbler?

This questions now spans more than two decades and, to be fair, I still don’t know. Don’t get me wrong, I love Kimmy, but she is an entity I cannot quite explain. I mean, fact: she is the Tanner’s quirky neighbor. Fact: she is somewhat rebellious, and a bit of an underachiever. And, fact: she is obsessed with the '90s — and, from the new Fuller House trailers, it seems this is an obsession she was never able to shake. But, beyond that, in order to understand Kimmy, you simply have to witness Kimmy.

Uncle Jesse Lives In The Attic... But The House Has No Attic!

Yup, internet super sleuths have been analyzing — and reanalyzing — my favorite, simple slice of childhood nostalgia since the series entered syndication and it seems the Tanner house does not have an attic, at least according to BuzzFeed. But... but... where did Uncle Jesse live? My best guesses: a hobbit hole, a “space” under the stairs, or a magic room. (Just a magic freakin’ room, people!)

Uncle Jesse wasn’t only a musician and a radio show DJ — two gigs I distinctly remember — I also learned he was an exterminator, an Elvis impersonator, an advertising mogul, a freelance musician, a kids show host (Mr. Egghead and Ranger Joe), and a “club owner,” according to BuzzFeed.

And while Full House was full of laughs, dated quips, and over-the-top cheesiness, it was also packed with important lessons, valuable lessons, coming-of-age moments, and segments that forever changed my childhood (like when the show spoke openly about Danny’s wife’s death, when Stephanie confronted domestic abuse — through her friend — when the show took us along Michelle’s emotional trip when Comet ran away, or when Uncle Jesse and Aunt Becky moved away).

So yeah, tongue-in-cheek aside, this is what Full House was about, and it is — I hope — what Fuller House will bring us later this week.