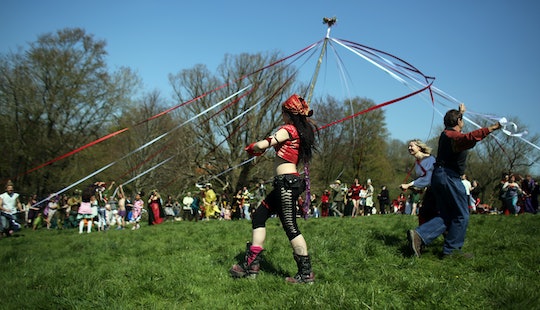 How To Explain May Day To Your Kids, As Simply As Possible

It is officially May 1 — which means it is officially shorts season, schools are preparing to let out for the summer and flowers are starting to bloom. May 1, however, also marks the holiday that millions every year choose to participate in: May Day. Although celebrated all around the world, May Day tends to get overlooked. So how do you explain May Day to your kids? It's a very important holiday that shouldn't be ignored.

More Like This
The Avengers Campus Is Open At Disneyland: Everything You Need To Know
Sesame Street Characters Can Now Help Your Kid Unwind Before Bed
Where To Travel With Your Kids This Summer
Ayesha Curry’s Chicken Bites Are Irresistible To Even The Pickiest Eaters

First off, what exactly is May Day? May Day is a holiday typically celebrated in the northern hemisphere that dates back to Pagan times. For some, it is a celebration of the season. However, many cultures have adopted the holiday and made it into their own, over time incorporating new traditions and reasons for celebrating. Most recognizably associated with May Day is the May Pole — which, according to some, represents the earth's axis or um, a phallic symbol associated with fertility. Ribbons are wrapped around a tall pole, around which people dance, holding on to the ribbons. Flowers are also associated with May Day celebrations as well as Morris Dancing, where men dress in white outfits with colorful sashes and dance to lively, traditional music. A very fun way to celebrate.

May Day, however, also marks International Workers Day, which is similar to Labor Day here in the United States. Trade Unions and other groups often hold demonstrations and commemorations for the working class.

International Workers Day got its start in Chicago in the 1880's where labor movements around the world were fighting for fair wages and work accommodations. While the United States doesn't celebrate it, pretty much every other country does, where the fight for worker's rights is still a reality.

While explaining demonstrations and impassioned protests associated with May Day might have to be reserved for when they are a lot older, May Day can be used to teach kids a whole trove of important life lessons — and yet another reason to celebrate.