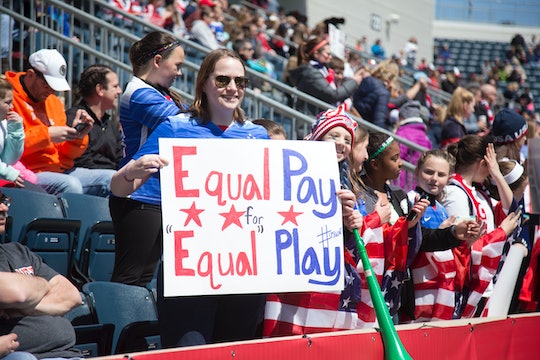 How To Fight For Equal Pay Every Day

You might have heard that Tuesday is Equal Pay Day, designated as a symbolic day for equal pay advocates in the United States to show support for pay equity and women in the workforce, and to highlight the current gender pay gap in this country. The date is chosen each year to represent how far into that year women have to work in order to catch up to what men earned the year before. You might be curious how you can go about drawing attention to the cause — and the good news is, there are a ton of actions you can take if you're interested in learning how to fight for equal pay on Equal Pay Day, and every day.

According to the non-profit Institute for Women's Policy Research (IWPR), back in 2015, female full-time, year-round workers only made 80 cents to every dollar earned by men, equaling a gender wage gap of 20 percent — despite the fact that women make up about half the workforce. Equal Pay Day was started by the National Committee on Pay Equity (NCPE) in 1996 to emphasize that gap between men's and women's wages, according to NBC News.

The bad news is, according to IWPR, "if change continues at the same slow pace as it has done for the past fifty years, it will take 44 years—or until 2059—for women to finally reach pay parity." The good news is, you can do something about that, starting today.

In 1963, former President John F. Kennedy signed the Equal Pay Law, making it illegal to pay women at lower rates for the same job as their male peers on the basis of gender, as NBC News reported. And in 2009, former President Barack Obama signed the Lilly Ledbetter Fair Pay Act.

So equal pay is still a concern all those years after Kennedy signed the Equal Pay Law, and it's still very important for us to find ways to reach pay equity. There are many, but here's a couple ways to get started, in honor of this year's Equal Pay Day.

On March 27, President Donald Trump took measures to revoke the 2014 Fair Pay and Safe Workplaces order that was put in place by Obama meant to protect women in the workplace, NBC reported. That order, the Presidential Executive Order on the Revocation of Federal Contracting Executive Orders, could hurt the progress made in recent years towards decreasing the pay gap.

NBC reported that the previous order by Obama guaranteed that companies with federal contracts had to comply with 14 labor and civil rights laws. It included two rules that affected women workers, involving paycheck transparency and a ban on forced arbitration clauses for sexual harassment, sexual assault and discrimination claims, according to that outlet.

In response to this executive order, you can speak out against it on social media to draw attention to the issue, or contact your representative about it.

A retail campaign, #20PercentCounts, is taking place on Tuesday in honor of Equal Pay Day. It involves local businesses in 25 cities offering 20 percent discounts to both women and men to highlight how women are paid 20 percent less than men in the U.S. Facebook Chief Operating Officer and Board Chair for LeanIn.org, Sheryl Sandberg, is spearheading the campaign, according to USA Today.

Donate To Organizations Working To Close The Wage Gap

Organizations such as the National Organization for Women, the American Association of University Women, the National Committee on Pay Equity, the National Women's Law Center, and many others make pay equity a core issue. Supporting any of them, or a similar group of your choosing, is one very proactive way to fight for equal pay alongside groups that are already skilled at working on it.

Volunteer With Organizations Working To Close The Wage Gap

As much as those aforementioned organizations need money, they need your time as well. Volunteers are an essential force for nonprofits and advocacy organizations, and often, your time is just as valuable to them as your money.

"Volunteering isn't always easy, but it's always worth it," one individual stated in the above video from The Volunteer Center. And it's true. By volunteering, you're not just talking the talk, but walking the walk when it comes to supporting a cause you care about. If equal pay is something you want to see come to fruition, volunteering to make it happen is important one way to be actively involved.

Don't know where to start? Check out any of those organizations listed above that make pay equality a priority, because they likely need volunteers as much as they need donations. Or, take a look at any of the following websites to link up to an organization seeking volunteers in your area:

People on social media, or in your personal life, may try to debate with you about the pay gap if you speak out about the issue or post about it, especially on Equal Pay Day. The best way to be prepared for that is to learn as much as you can about the topic, and hit 'em with the facts.

The Global Gender Gap Report 2015 lists tons of information on the pay gap, and it's a great place to start to get your statistics straight. You can Google other stats as well, and ready an arson of articles to refer to when talking about the issue. Just be sure to check the sources on every site you visit. Or go old school, and head to a library for books on the topic. Then you'll be supporting your local library at the same time — clearly a win-win.

If you're white, it's important to note that women of color have an even tougher time earning their fair share in the workplace. According to the National Committee on Pay Equity, Black women make 64 cents to every dollar a white male makes. That same resource states that Latinx women only make 54 cents by comparison.

Being aware of the discrepancies in pay when it comes to women of color is extremely important to the wage gap discussion. Being intersectional in an approach to advocacy and activism is always a good idea, and it's no different when it comes to fighting for equal pay.

Calling your representative was previously mentioned as an action to take in regards to the Presidential Executive Order on the Revocation of Federal Contracting Executive Orders. But equal pay for women was a concern before that order, and it will remain a concern for years to come if we don't speak out and demand our representatives act on the issue with legislative action and support.

If you don't have a cell phone, or maybe haven't been able to pay your bill this month and can't use it at the moment, use your landline. If you don't have a landline, use a friend's. If you somehow don't know anyone with a personal phone, find a public phone. They do still exist in some places, I swear. No excuses.

Find a way to contact your elected officials here.

There are so many ways to fight for equal pay, today and every day. Check out the #EqualPayDay hashtag on Twitter and other social media platforms to learn more about the cause — and to see what others are saying and how they are doing their part — and for more ideas on how you can get involved yourself.