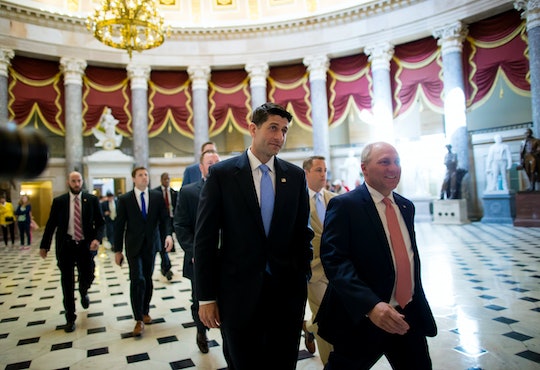 How To Find A Town Hall Meeting In Your State

On Thursday, the House of Representatives met and voted to repeal and replace Obamacare with the American Health Care Act. On Friday, those representatives broke for a week long congressional recess. With this recess, members of Congress can return home to their constituents, but they won't greeted with open arms. As representatives return to their home states, some will want to hear from the people they're representing, which is why it is important to know how to find a town hall meeting, in order to hold your representatives accountable for the mess they've made.

The impacts of passing the AHCA, with the support of President Donald Trump, are enormous. And now the bill will go to Senate where it is one step closer to becoming a law. The AHCA makes dramatic changes to Medicaid, charges policy holders more based on their age, and allows states to essentially do what they want with Obamacare. This allows for states to eliminate required coverages where they see fit, according to NPR, and charge more to those who have pre-existing conditions. Don't get me started on those pre-existing conditions. Essentially, the AHCA will have a huge (and negative) impact on a lot of people, even those who support the bill. Now is the time to let your representative know, during their weeklong recess, how disappointed you are and how the bill will affect you.

Town hall meetings are one of the only key ways politicians can interact directly with voters and answer questions. Representatives need their constituents to vote on them as much as we need them to represent us in Congress. Without us, they wouldn't have the power to vote on things like the AHCA.

Town hall meetings in February, while the first draft of the AHCA was circulating didn't go the way representatives had planned. Massive amounts of people turned out to these meetings to let their representatives know how they would effect them. That draft did not get a vote — and now hopefully, those same representatives will be able to hear and understand the massive impact of their actions.

If the AHCA will impact your life or the life of anyone else you may know, now is the time to track down your representative and let them know how you feel.