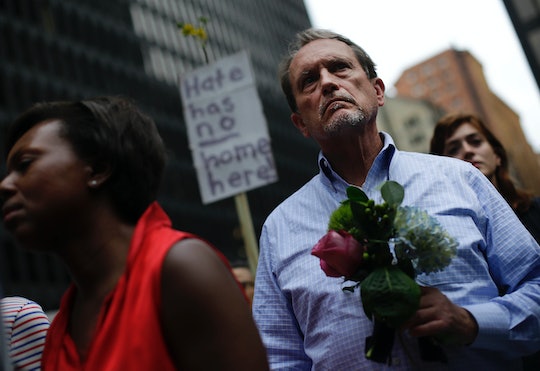 How To Find An Anti-Racism Protest Near You After Charlottesville

Retweeting celebrities and getting in Facebook arguments with relatives can be cathartic, but sometimes, you need a bigger way to make your voice heard. If you're wondering how to find an anti-racism protest near you after Charlottesville, there's no shortage of marches, vigils, and gatherings around the country. The events of last weekend showed that there are more Americans with hateful views than many realized, but those who oppose bigotry are organizing now, in order to show solidarity with the victims and let the perpetrators know that their hate won't be tolerated.

President Donald Trump was welcomed home to Trump Tower on Monday by a throng of protesters chanting "Shame!" in response to his comments about the events in Charlottesville, Virginia, over the weekend. On Saturday, Trump blamed the violence between white supremacists and counter-protesters on "many sides." Facing backlash, Trump retreated to his New Jersey golf club on Sunday with nary a tweet. On Monday, Trump bragged about the economy before reading a prepared statement that called out "KKK, neo-Nazis, white supremacists, and other hate groups," but he went off script again on Tuesday, saying "there is blame on both sides," though both had some "fine people." In a stunning show of "whataboutism," he then claimed that the "alt-left" (which does not exist) was at fault.

Whether you want to protest racism alone, or the president's handling of it, there are plenty of events planned in the coming days. According to USA Today, events are planned for Manchester, Iowa, on Thursday, and Daytona Beach, New York City, and Burton, Michigan will all host events on Friday. Amid rumors that another Charlottesville-style rally may be coming to Boston, seven different events are planned throughout the city and surrounding communities between Wednesday and Saturday, according to the Boston Globe.

If you're looking for something in your immediate area, Facebook may be the best option. After logging in to your account, navigate to the "Discover Events" section, where you can narrow down the date and city to find protests close to home. It's an easy way to find small community gatherings that might not gather media attention. If you'd prefer a larger show of support, though, the Indivisible Guide has a searchable database of more than 100 Solidarity with Charlottesville events. And if there's still nothing near you, plan one. Be sure to call your city or town hall to inquire about a permit, text a few friends, and ask them to spread the word. As we all learned from the Nova Scotia Women's March, it doesn't matter how tiny the group is; simply showing up is what makes the biggest impact.