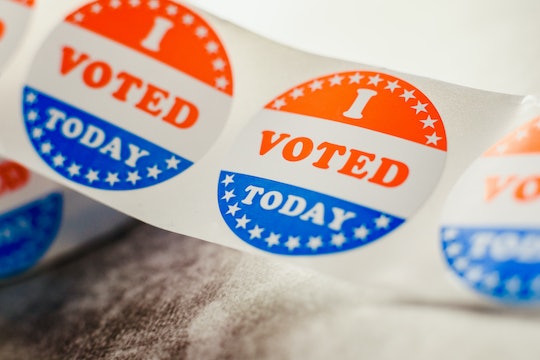 Checking Your Voter Registration Status Is A Quick & Easy Process

The 2020 presidential election is bound to be historic with a record number of Democratic candidates vying for their chance to oust President Donald Trump from the White House. In addition to that, there are several critical issues currently at stake, like global warming, gun control, and healthcare, to name a few issues. So can anyone afford not to vote? Probably not. With this being said, take a minute to find out if you're registered to vote so you can let your voice be heard in 2020. And what better day to do it than on National Voter Registration Day, Sept. 24?

The easiest way to find out if you're registered to vote is to visit IWillVote.org. First, choose your state of residency and then check your voter registration status. If you are not registered, the site will prompt you to sign up from there. The site is also available in Spanish.

No internet access? No problem. You can call the voter registration hotline at 833-336-8683 for assistance.

If you want another option, you can also check your status on Vote411.org. To verify voter registration, select your state and follow the prompts. While there, check out other helpful information, including registration deadlines. The deadline to register to vote in California is 15 days before any statewide election, for instance, while in Connecticut, you have five days before a primary election. Once you've brushed up on voter registration deadlines, you can search for upcoming elections in your state.

One quick note: Not all 50 states allow online voter registration. Right now just 37 states permit it, meaning you'll have to register by mail or in person at a local polling place, according to Fast Company.

Furthermore, there are two important dates to remember once you've registered. The next presidential election is on Nov. 3, 2020, according to Vote Smart. The primary, where voters will narrow down their party's presidential elect choices, is on March 3, 2020. So make sure you're all squared away before these dates.

Started in 2012 and occurring on the fourth Tuesday of September every year since, National Voter Registration Day is meant to encourage eligible voters to register before fall elections. In 2018, 865,015 voters used National Voter Registration Day to register to vote, across all 50 states, according to USA Today. This was accomplished by thousands of volunteers (22,641 to be exact) hitting the pavement, making calls, and stirring up interest online.

But there's still a lot of work to be done. During the 2016 presidential election, only 56 percent of eligible voters cast ballots, despite that fact that 70 percent felt that high voter turnout was very important to them, according to Pew Research. This puts America near the bottom of total voter turnout by country, with Belgium being the highest at a whopping 87 percent, according to U.S. News & World Report.

At that time, 245.5 million Americans were eligible to vote but only 157.6 million were actually registered, according to the Census Bureau. Of that number, only 137.5 million actually voted.

To say there's a lot going on politically in the U.S. is a major understatement. But if you want your voice heard, the best thing to do is vote. So check your voter registration status, brush up on candidate proposals, and prepare to get out there and exercise your right.