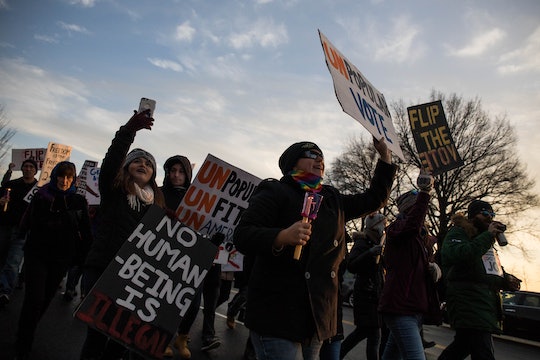 How To Find Your Local Sister March

The Women's March on Washington is expected to be one of the largest demonstrations linked to the inauguration of President-elect Donald Trump, with as many as 200,000 people expected to show up at the intersection of Independence Avenue and Third Street SW in downtown Washington on the morning of Jan. 21. People from all over the country are planning to make their way to the city to join the rally and demonstration in support of women's rights, but if you can't make it, the good news is that heading to D.C. isn't the only way you can participate. That's because there are actually 370 smaller "sister marches" happening in other states — as well as in other parts of the world, according to The Huffington Post. And together, they are making the March on Washington "a global movement," according to national sister march spokeswoman Yordanos Eyoel. Wondering how to find your local sister march for the Women's March on Washington? It's easier than you think.

The sister marches may not be an official part of the Women's March on Washington, which has now grown from a grassroots protest being planned on Facebook to a massive event backed by political organizers and advocacy groups — including Planned Parenthood, who has signed on as an official event partner, according to The Guardian — but that doesn't mean they are any less important. The sister marches have been organized by local volunteers and "each will have its own programming," according to The Huffington Post, which will also give local marches a chance to add meaning specific to their cities' histories. A list of all the sister marches throughout the world can be found on the Women's March on Washington's official website, along with an estimated count of those who are expected to attend (almost 700,000 participants are currently anticipated). The list is updated daily, and anyone without a sister march in their city still has the option to host one if they'd like.

On the Women's March on Washington website, anyone looking for a sister march in the United States can easily find their local march by typing in their zip code. The sister marches are also listed below the map, organized by country. While the vast majority of marches are taking places within the United States (with all 50 states and Puerto Rico hosting at least one march), 55 more cities around the world on six different continents will also be home to a local sister march.

This is an unprecedented, organic and viral grassroots global movement that is growing everyday. More than 500,000 people have already committed to march all over the country and the world in just a matter of weeks. The aggregate turnout has the potential to exceed 1 million marchers. What makes this movement even more special is that people who have never been politically active before are now mobilizing.

Perhaps unsurprisingly, the marches planned in major cities such as Los Angeles, Chicago, Seattle, Portland, Boston, and New York, have some of the biggest expected turnouts from current registration numbers, but support is also strong for marches in smaller cities as well, like Topeka, Nashville, Des Moines, Oklahoma City, Columbus, and Phoenix.

Multiple marches have also planned in Australia, Canada, Costa Rica, France, Germany, Ireland, Italy, Kenya, Mexico, The Netherlands, New Zealand, Norway, Portugal, South Korea, Spain, Sweden, and the U.K. And if you happen to find yourself in Antartica on Jan. 21? Well, you can participate there too: a "Penguins for peace" march has been planned in Port Lockroy, Antarctica, though the event page has emphasized that participants must be careful not to leave "any marks, trampled messages, etc.," given the nature of the location.

Although the Women's March on Washington and its sister marches are obviously tied to Trump's inauguration, organizers have emphasized that they aren't specifically meant to be "anti-Trump" demonstrations, but are intended to have a broader focus on human rights:

While each person may have their own reasons for marching, the mission is to bring people together to take a stand on issues that deeply impact all of us. The marches will seek to reaffirm the core American values of freedom and democracy for all at a time when many fear that their voices will be lost, specifically related to women’s rights, immigrant rights, worker rights, reproductive rights, LGBTQIA rights, environmental rights, rights for all races, and religious freedom.

And while there's no question that the Washington-based march will be the one likely to make the biggest waves, Eyoel told The Huffington Post that all participation matters, and can make a difference:

If you are not able to make it to D.C., I will say that you’re still creating the same kind of change, and you’re making sure your voice is heard. It’s important to do that within the community where you live.

In addition to the full listing of sister marches, information on location and specific programming details — including registration information — can be found on each march's ActionNetwork.org page, listed here.