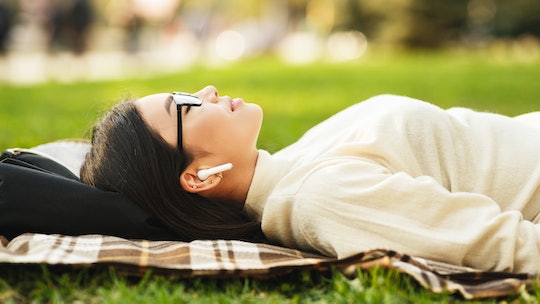 Can't Find Your AirPods? Try This To Locate Them

If you own Apple AirPods, then you'll want to run, don’t walk, over to your phone and turn on the Find My iPhone feature in settings ASAP. That’s because the locating system is integral in how to find your lost AirPods, and, in turn, could just save you a lot of money if one or both of them ever go missing. The finding feature has been expanded to include not only your phone, but other Apple devices, including your AirPods, that you connect to your phone.

Just look around and it’s easy to realize that Apple’s newest listening devices are wildly successful. They are, however, also a lot easier to lose than almost any wired listening device, which are more likely just to fall onto your neck or clothing. As NBC News recently reported, Apple got wise to the angst some owners were feeling when an AirBud or pair went missing. As such, the company integrated the tech to find them right into the Find My iPhone feature, as Apple explains on its website.

To use the locater, simply go to Find My iPhone on your device. Once there, you should see your AirPods listed as a device that you own, after you've linked them. A map will show you where they were last located. If they are somewhere close by, tap Actions and then tap Play a Sound to send a tone to the earbuds that should help you find them in the couch cushions or floorboard of your car. You can also use this system on a computer by signing in to icloud.com and clicking on Find iPhone.

When you open Find My iPhone, you’ll see a list of all the devices that you own, like Apple watches or iPads, according to Business Insider. You may note that there are colored dots next to some of them, which can help you identify the status of a device. According to Apple, a blue dot indicates the device you’re currently using, a green dot shows that a device is online, and a gray dot means that a device is offline, which could indicate it’s run out of battery or isn’t in range. That information can also help you monitor if someone is using a device when it is supposed to be turned off, for example, your kids on an iPad when they should be asleep.

One slick feature that Apple also included is the ability to find your AirPods even if they are separated, according to Business Insider. The map will only show the location of one pod at a time, but once you find the first one, be sure to put it in its case; the second one will show up on the map after you refresh it.

If you absolutely can’t locate one of your AirPods at all, you fortunately don’t need to shell out a full $160 for a replacement set. Apple will sell you one for $69, or the wireless charging case for $79, according to CNBC. The wired charging case will set you back $59.

There’s no doubt we’ve become really attached to these little devices. So much so, that some people are even having stress dreams about them, according to Mashable, which spoke to one college who told the site she thinks about losing her AirPods several times a day: "It’s like worrying about losing your phone or wallet."

Now users can hopefully worry just a little less, provided that the all-important Find My iPhone feature is turned on. Apple cautions that, just like with any device, the locating system will not work if it was not enabled prior to the loss, so be sure to toggle that feature on ASAP.

More Like This
Don’t Like The New Instagram? Well There Might Be (Some) Hope
Yellowstone's Kelly Reilly Has A Much More "Content" Married Life Than Beth Dutton
20 Adorable Photos That Prove Prince William & Princess Charlotte Are Thick As Thieves
The Bear’s Jeremy Allen White Is A Private Breakfast Chef For His Daughters