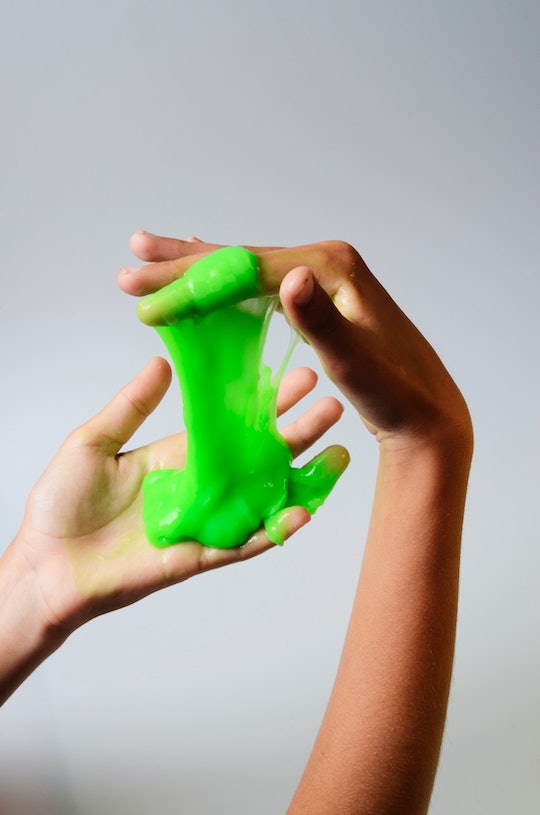 Plenty of kids love playing with slime, but the homemade goopy stuff isn't without its problems. Sometimes older batches of slime can get soupy and turn into a plain old mess. In these cases, knowing how to fix melted slime without activator can help you and your kid get back to slime play. Hey, you don't always have time to run to the store for emergency Borax or other activator purchases.

Thankfully, there are plenty of ways to revive slime in a hurry. Adding a dollop of shaving cream to your watery slime can bring it back to life, as noted by YouTuber Tofu Shan. Just add a little cream at a time until it turns properly slimy again, and then your slime is good to go. For a different take, you can fix runny slime with contact lens solution and baking soda, as noted by YouTuber Heart2Create. Again, adding in small amounts at a time is the best bet, and you can always watch the video for a more thorough explanation. For the simplest solution of all, just stick the slime in the freezer for a few minutes, as explained by YouTuber My diy life. Although it didn't work for everyone who posted in the comments section, it looks like several user revived their slime with this method. With a little trial and error, your slime can be perfectly intact, squishy, and fun again.

A popular kid trend that shows no sign of slowing, making homemade slime is kind of a big deal all over YouTube communities. And if you have a child of a certain age, then you know all about the way kids love this stuff. In spite of the mess, plenty of educators and parents alike appreciate this spike in slime popularity, because some basic lessons about chemical reactions and the importance of proper measurements are all part of the fun.

However, not all of the ingredients in homemade slime are exactly kid-friendly. In fact, borax is a common slime activator ingredient, as explained in Mother Nature Network. But it isn't always the best thing for kids to handle for long periods of time. "Something that's a chemical should not be used as a toy," said pediatrician Richard Uluski, M.D., as noted in Parents. "From a medical standpoint, too much of Borax can lead to medical problems including things like seizures." Not all pediatricians are so concerned, however, and other doctors explained that kids should be fine making slime with Borax as long as they don't eat the stuff, as further explained in Parents.

That said, it's totally fine if you want to limit your kid's exposure to Borax when it's time to revive that drippy cup of slime. Or maybe you just happen to run out of the stuff just when your kid asks for help repairing the liquid slime. Whatever the case, you and your little scientist can have fun trying out the many potential ways to fix melty slime without adding in extra activator.