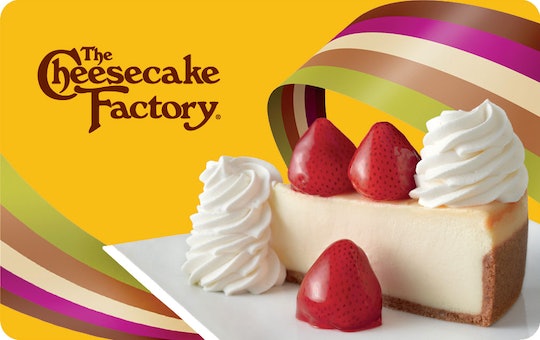 by Christina Montoya Fiedler
May 8, 2019

Moms are notoriously vague about what they want for Mother's Day. "Oh don't worry, I don't need anything this year." But, of course you want to treat the woman who put bandages on booboos and put the peanut butter and jelly on your sandwiches. And you wouldn't want to show up to Mother's Day festivities empty handed. But what to get her? How about a sweet treat? Here's how to get $10 free for Cheesecake Factory loving moms this Mother's Day.

For every $50 e-card purchased on the Cheesecake Factory site, you can get an additional $10 to keep for yourself or add to her gift. The promotion runs now through Sunday May 12, 2019, according to an announcement from the restaurant chain.

But take note, the maximum number of complimentary e-cards is $40 per person.

Cheesecake Factory is known for its enormous selection and menu that reads like a novel. So, what should mom order on her special day?

The restaurant offers 250 menu selections, which includes their Skinnylicious entrees that are all 590 calories or less, according to Food News Feed.

But who wants to be good on a day that's made for celebrating? Cheesecake Factory holds true to its name by offering 50 different kinds of cheesecake — salted caramel, coffee and cream, red velvet, lemon merguine, chocolate chip cookie dough, and much more. And they sell about 35 million slices a year!

Just don't ask how many calories are in each slice. A piece of Oreo cookie cheesecake runs about 830 calories, according to Reader's Digest. Although you can get a slice of low carb cheesecake that's about 600 calories. But, hey, you only live once.

Not sure if there's a Cheesecake Factory near you? Check out their restaurant locator to find your closest restaurant.

Mother's Day is a huge holiday in the United States. In fact, it generates $25 billion in sales every year, according to Forbes. And kids usually spend more on mom than they do on dad for Father's Day later in June.

The average person spends about $124 on their mother. Texas spends the most per mom at $248, followed by New York at $225, and Washington at $210, according to Finder.com.

The state that spends the least on mother's day gifts is Oregon, followed by Wisconsin and Indiana, with residents spending an average of just $30.

And, cards, flowers, food, and jewelry are among the top gift choices, according to CNN.

But it's not always about money. Parenting Magazine recently polled mothers and found out that the number one best gift you could give would be a clean house, followed closely by sleep.

What moms might really want, is a day free from all the pressure that motherhood brings, according to ScaryMommy.

No matter what you get your mom this year, let it come from the heart. After all, she gave you life. Is it so much to ask that she get a gift fit for a queen? Certainly cheesecake is a good start.