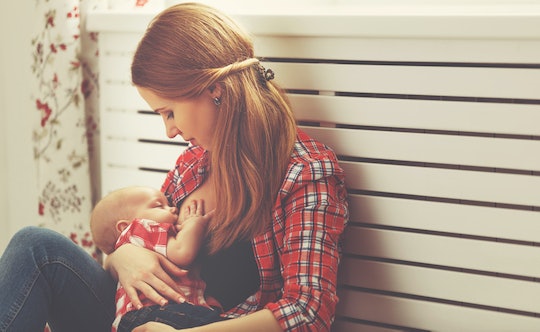 Breastfeeding doesn’t come easily for every new mom. In fact, more often than not, a nursing mother will encounter a few bumps in the road — often worrying that breastfeeding isn’t turning out to be an easy and natural journey with her baby. Although it's touted as most natural thing in the world, breastfeeding won’t necessarily be easy, especially right at first. Luckily, learning a few tricks before you start, like how to get a deeper latch, will help save your sanity and maybe even your breastfeeding relationship as you go on.

According to La Leche League International (LLLI), getting a proper latch will prevent pain in your breasts and nipples, and will also ensure that your baby is getting exactly the right amount of milk. LLLI referred to latching on as the “mother-baby dance” because it can actually be fairly tricky to get right, until you and your baby get the hang of it. But what is a shallow latch? The Office On Women’s Health defined a shallow latch as when your baby doesn’t have enough of the breast in their mouth, causing pain to the mother and not enough milk for the baby.

But even if you’ve been nursing for a while, learning to correct your baby’s latch isn’t impossible and doing so will drastically improve the quality of your breastfeeding sessions.

According to Fit Pregnancy, the first step to a good latch is making sure you’re in a comfortable position. If you’re sitting up straight, make sure you have enough back and arm support. If you’re reclined or lying on your side, make sure that you’re able to relax fully without holding yourself up.

Once you’re comfortable, hold your baby in the preferred position (likely a cradle hold, if you’re just figuring things out) and make sure your baby’s ear, shoulder, and hip are in a straight line and your bellies are touching, according to LLLI.

Then, cup your breast in your opposite hand and support it, much like a bra would, and pull your baby close to you with the arm supporting them. Fit Pregnancy noted that touching your baby’s nose and upper lip with your nipple until they turn their head up towards your breast and open their mouth to latch will ensure that their mouth is opened wide enough.

Now help your baby get as much of the breast in their mouth as they can. They should have the entire nipple and most of the areola in their mouth for a proper latch, LLLI noted. If your breasts are large, you may need to use what LLLI called the “sandwich hold” on your breast to make it more accessible to your baby. Fit Pregnancy noted that the goal is to get the nipple as far back in their mouth as you can, hence the term “deep latch.”

Although you may have to guide your baby along for the first few weeks, once you both get the hang of it, getting a perfect latch every time really will become second nature.