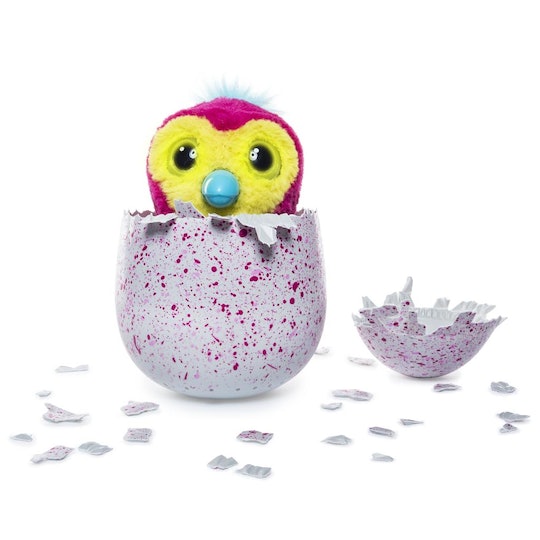 How To Get A Hatchimal If They’re Sold Out, Because Your Kid Definitely Wants One

If you're a parent and your kid has access to TV, the internet, or the toy catalog from any major retailer, boy, are you screwed this year. Every holiday season brings that one toy that all the kids want, but this year, it's harder to find than ever. Parents worldwide are scrambling as they try to figure out how to get a Hatchimal, the interactive stuffed animal that sold out the moment it hit store shelves in October. Apparently the manufacturer, Spin Master, didn't anticipate what a huge success its product would be. A statement on the Hatchinals website reads, "The consumer response to Hatchimals has been extraordinary, exceeding all expectations. Some of our first shipments have already sold out. While additional product will hit retail shelves in November, we anticipate this inventory will also sell out quickly. We have increased production and a whole new batch of Hatchimals will be ready to hatch in early 2017."

Honestly, I don't see how nobody saw this coming; the Hatchimal checks all the boxes of hot holiday toy attributes. Each one is unique, like a Cabbage Patch Kid. What you get is a mystery, like a Kinder Surprise Egg. Kids have to "hatch" and "raise" them, like a Tamagotchi. It learns to talk, like a Furby, sounds as annoying as Tickle Me Elmo, and plays games that mimic Simon, Whac-A-Mole, and the Magic 8 Ball. And, of course, it debuted in the fall. It's the perfect storm.

As a veteran toy store employee, allow me to educate you on the right and wrong way to get your hands on the hottest toy of the season. I really shouldn't have to explain this, but arguing with, yelling at, or threatening store employees will not help your case. Remember that those people are human beings, working extended hours for very low wages, and they don't deserve your abuse. Employees on the retail floor likely don't even know if and when they'll be getting any Hatchimals in stock, so don't bother asking. The only people with that knowledge are typically the warehouse staff and select managers, and you'll never even see their faces.

When the product does arrive, it probably won't even make it to the shelves, since they'll be quickly emptied. Expect them to be unceremoniously dropped on a pallet right at the front of the store, so rabid shoppers can grab one and get out without causing too much of a ruckus. If you're truly committed to nabbing a Hatchimal, your best course of action is to wait patiently for the store to open each morning, calmly enter, and politely ask the first employee you see if there are any in stock that day. No matter the answer, thank them. No luck? Repeat.

If that seems like too much (and I don't blame you), consider taking the opportunity to teach your child what Mick Jagger has been telling us for decades: You can't always get what you want. There's always next year; if they're still hell-bent on getting a Hatchimal, it won't kill them to wait until their birthday. Whatever you do, don't settle for some weird knock-off, because that will eventually cause more resentment than no toy at all (looking at you, Mom, who gave me knock off building blocks and told me they were Legos).

Finally, yes, you can get a Hatchimal on eBay, if you don't mind paying triple the price. But I'd caution parents against that, unless it's for a very sick child who literally can't wait until the next batch comes out. Buying from a reseller is supporting the very people who caused the stores to sell out in the first place. They're taking advantage of children, and leveraging parents' love for profit, and that's just gross. Remember, there are probably 20 other items on your kids' wish lists, and by this time next year, they'll have forgotten all about Hatchimals. I bet you have no idea where your Tamagotchi is now, right?