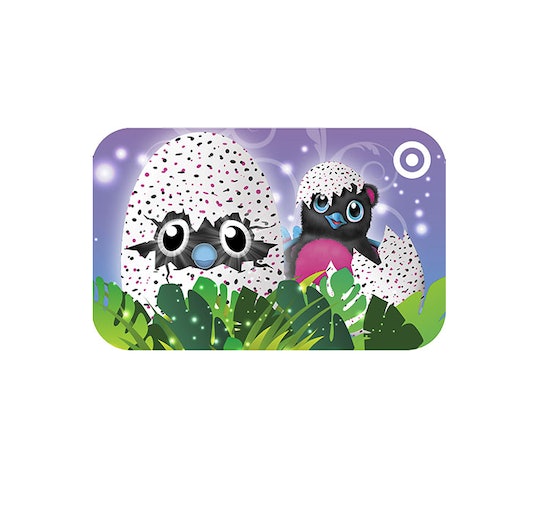 How To Get A Hatchimals Gift Card From Target, Because It May Be Your Only Option

I hate to break it to you, but if you're hoping to buy your kid a Hatchimal for a holiday gift, you might be out of luck. The toy, a cross between a Furby and a Tamagotchi, is the perfect holiday hit, but somehow, the manufacturer didn't see it coming. Luckily, there is a consolation prize: Target is selling Hatchimals gift cards, so at least kids will have something to open on Hanukkah or Christmas.

Most stores have been sold out of Hatchimals since October, and the interactive electronic pet, normally priced around $50 or $60, is going for hundreds of dollars on eBay and other resale websites. While the manufacturer, Spin Master, has long promised a new batch of Hatchimals will arrive in January, a small amount will be available for sale at select Target stores starting on Sunday. But there are nearly 1,800 Target locations, and the store's press release specifically says that "dozens" of Hatchimals will be received, so don't get your hopes up. But if your kid truly has their heart set on a Hatchimal, you can get them a Hatchimal themed gift card, which will be available in the toy aisle. The gift cards can be loaded for any dollar amount, and they do not reserve a Hatchimal, so it's sort of one those "it's the thought that counts" scenarios.

If the concept of opening up an envelope containing a piece of plastic featuring an image of the toy your child really wants doesn't sound satisfying enough, Good Housekeeping has reported that some parents are giving their children letters "from Santa Claus" explaining that their Hatchimal won't arrive until January due to a variety of creative reasons including mommy Hatchimal exhaustion from too much egg laying, and even climate change. Oh, how wish I were kidding.

Children, on the whole, are actually pretty resilient, however, and learning that they won't be receiving the stuffed animal that was probably one of many items on their wish list probably isn't going to kill them. The Hatchimal craze is surely due in part to kids actually wanting them, but it's also spinning out of control because of parents' quest to win. Ask yourself, is it really that important to your child that they receive a Hatchimal, or is it more important to you? If it really is the former, a Hatchimal gift card from Target paired with a frank talk about supply and demand might be your best option, but remember that it's not worth breaking your back over.