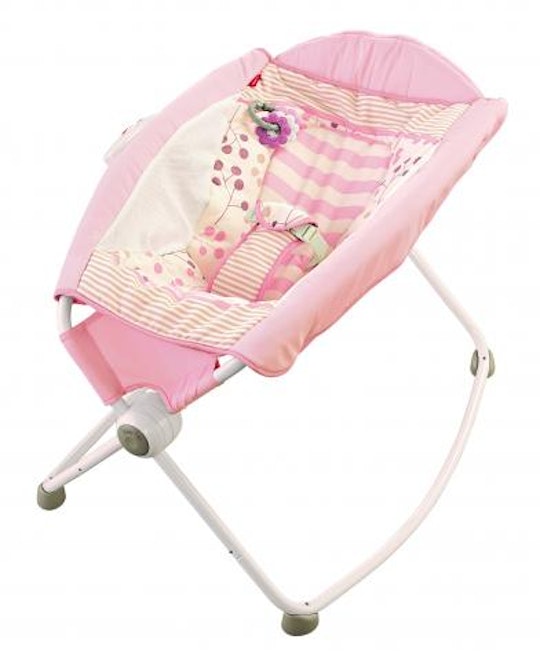 Navigating a recall can be a huge pain in the butt. Figuring out what documentation you need, where it should be sent, if you need to go to a store or if you can ship it — all of that can complicate what is already an obscure procedure. Recently, Fisher-Price recalled over 4 million units of their popular Rock 'n Play "sleeper," and if you're in possession of one of these, you need to know what steps to take to get your Rock 'n Play recall refund voucher.

For many Fisher-Price Rock 'n Play devotees, reports of as many as 32 deaths allegedly tied to use of the popular item, per a Consumer Reports investigation, was a shock. The American Academy of Pediatrics (along with Consumer Reports) issued a statement that encouraged parents to stop using the product and for Fisher-Price to issue a recall, citing "convincing evidence" that the incline of the sleeper put infants at risk. Finally, a few weeks ago, Fisher-Price relented and issued a voluntary recall of the nearly 4.7 million units that sold, stating "Infant fatalities have occurred in Rock 'n Play Sleepers, after the infants rolled from their back to their stomach or side while unrestrained, or under other circumstances." Depending upon when the product was purchased, owners are eligible for either a full price refund or a voucher for a Fisher-Price product that will be on a list of currently undetermined products from Fisher-Price.

Parents who love the product are on the fence about whether or not they're willing to give up their Rock 'n Play. The people who love it, truly love it, have been outspoken on social media. But the stories speak for themselves. The New York Times reported on misleading language in the marketing of the Rock 'n Play, implying to consumers that it was safe to use for activities that it was not approved for — sleeping while inclined — while Fisher-Price's initial response to alleged deaths attributed those incidents to the device being "used contrary to safety warnings and instructions," per the Times.

When Fisher-Price ultimately caved and issued a voluntary recall, it was under the pressure of the Consumer Products Safety Commission and the American Academy of Pediatrics, as the company was facing multiple wrongful death lawsuits involving the popular product. Fisher-Price declined to comment on the lawsuit in the Times report. Romper has reached out to Fisher-Price, but did not hear back at the time of publication.

The recall isn't the easiest that I've seen. First, you have to go to their site and file a form to get a prepaid envelope with instructions sent to you. It requires you to disassemble the entire product and send Fisher-Price two "hubs," (pictured below) along with any receipt that you may have.

As per the recall directive from Fisher-Price: "If the Fisher-Price Rock 'n Play Sleeper was originally purchased new — either by you or by a prior owner of the product — on or after 12 October 2018, you will receive a full cash refund. If you include your original receipt you will be reimbursed for the receipt amount including sales taxes paid."

However, if you bought the Rock 'N Play before Oct. 12 2018, Fisher-Price said that "you will receive a voucher for a Fisher-Price product to be selected from a list of products to be provided by Fisher-Price. Your product choice will be determined by the original date of purchase of the product."

The refund will take a whopping 12 to 18 weeks to process, likely because of the sheer volume of the recall at near 5 million units sold.

More Like This
The Difference Between The PICU & The NICU
What NICU Means & What To Expect From A NICU Stay
Experts Explain Whether It’s Safe For Your Baby To Sleep On Your Chest
30 Adorable Baby Halloween Costumes, From Animals To Avocados