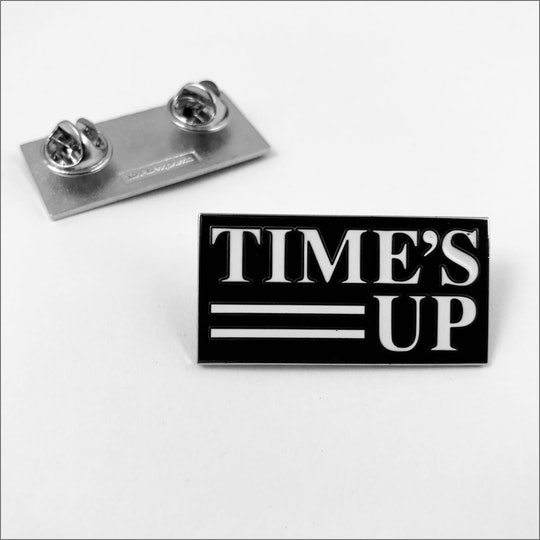 This year's Golden Globes' hottest accessory comes with more than just a fancy name and high price tag. Celebs at the 75th Annual Golden Globes awards show are making a statement with their fashion choices and took a stand against sexual harassment and inequality. You may be wondering how to get a Time's Up pin of your own after seeing it all over the red carpet. You unfortunately can't get your hands on one right now, but you can pre-order a Time's Up pin on the initiative's website.

Nominees and presenters are among the attendees of Sunday night's Golden Globes who sported a small black and white pin that reads "Time's Up." The pins are a part of the Time's Up initiative to end sexual harassment and inequality. The pins, along with wearing black to the award show, serve as a public statement that those who are wearing them will not take injustice lying down. You can show your solidarity as well by putting an order in for a pin through the Time's Up website, where it's selling for $12 and is expected to arrive in four to six weeks.

Reese asked me to come to the actors’ group, and told me they were going to be wearing black and would I consider creating a pin for the nominees and male presenters. We were up against the holidays, but I said I could do it.

The popular pins and the initiative are one topic to take center stage at the 2018 Golden Globes with big names like Eva Longoria, Sarah Jessica Parker, and Witherspoon including them in their ensembles. And making the pins available for purchase is an arguably smart move to help the movement continue to raise funds and awareness for the Time's Up legal defense fund, which was created by attorneys Tina Tchen and Roberta Kaplan, along with actors and other entertainment professionals, to connect people facing sexual harassment with legal representation and funds to secure it.

Phillips designed the Time's Up logo and the accompanying pins with the help of her "partner in crime," Los Angeles jewelry designer Michael Schmidt and other Hollywood stylists. The logo and existing 500 pins were created in as little as two weeks. While the time crunch and added pressure of the holidays certainly complicated the issue for Phillips, she told The Hollywood Reporter that it was an honor to design them. "I met so many great women, and it was such an honor to be called to action," she told the publication.

The Time's Up Initiative, which was inspired by the recent #MeToo movement, was first announced on New Year's Day. The initiative consists over more than 300 women who work in television, film, and theater who hope to fight sexual misconduct in the workplace. Their cooperation and commitment empower less-privileged women to make their stories heard.

Witherspoon spoke with The New York Times about the rationale behind the Time's Up movement and why it is so important, saying:

Fellow Time's Up member Eva Longoria told the Times that the Golden Globes are an important platform for the movement's message:

For years, we’ve sold these awards shows as women, with our gowns and colors and our beautiful faces and our glamour. This time the industry can’t expect us to go up and twirl around. That’s not what this moment is about.

Even though you can't overnight a pin at the moment, you can contribute to the fund and help to make a difference in the meantime. To donate to the cause, simply visit the Time's Up Legal Fund GoFundMe page and contribute an amount of your choosing. And of course, you can always make a statement of your own by standing up to sexual harassment and inequality in your own workplace.