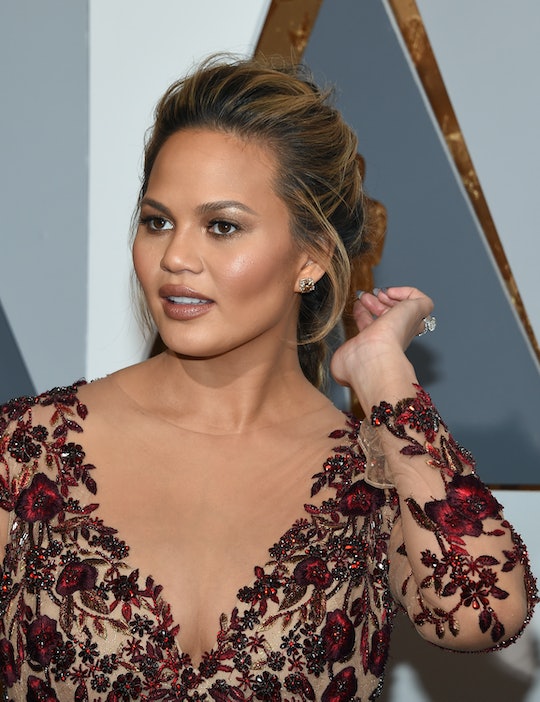 How To Get Chrissy Teigen's Baby Shower Cookies, Because Your Kid Needs Those Crowns

Chrissy Teigen is a straight goddess. She's beautiful, hilarious, she calls the president by his first name, she's married to the dreamtastic John Legend, and she's the kinda chick you could totally imagine hanging out with and having a great time. So it comes as no surprise that Teigen is owning this whole pregnancy thing, including having two immaculate baby showers. But the standout from both — besides the Instagram evidence that Teigen is, in fact, even more beautiful while pregnant — were the cookies from the first shower. Remember those? And now, keeping her trend-setter street cred well in tact through her third trimester, everyone wants to know how to get Chrissy Teigen's baby shower cookies for their own baby bash.

The cookies were custom jobs all decorated to look like little pink-and-white crowns, bottles, buggies and onesies. So naturally, when Teigen shared pics of the baby baked goods that were able to perfectly straddle the line between looking both beautiful and delicious, people went bananas.

Because, let's just face facts: I'm never going to hang with a Kardashian or inspire memes from national awards shows, but I can eat the hell out of a cookie. And so can everyone else. It's an easily attainable way to become like Chrissy, if only for a fleeting bite or two. Besides, the cookies really are gorgeous. Take a look at this Instagram shot from her shower a few weeks ago, highlighting piles of the perfect sweet treats. She added the caption, "Luckiest girls around."

The baby shower with a very royal theme was held on March 6 — at a jewelry store of all places — and looked like a big, gorgeous blast. Both Teigen and Legend had bejeweled crowns that spelled out "Baby Mama" and "Baby Daddy." The whole party looked as pretty and fun as the mother herself.

So I did a little investigating and no one seems to know where the cookies came from. Were they created by little French fairies? Did Taylor Swift and her squad stay up late the night before whipping those up? What's the deal?

Since the shower seems to have been thrown by Teigen herself, and none of the media reports included a shout out to who made the cookies, I decided to Tweet the social media princess and see if she might respond. Stranger things have happened, right? But as of the time this article was published, no word back yet. But she's busy! She might respond later.

Then I found another clue, a young lady who looks like she's in college, bragging on Twitter that her friend's mom made the cookies from Chrissy Teigen's baby shower. So I sent her a note to find out more. It turns out Teigen's party planner hired Giselle, a baker and blogger at Baking in Heels. She re-posted Teigen's Instagram image of the cookies and explained she didn't realize who the cookies were for.

"So I had a party planner order cookies this past week," Giselle wrote on Instagram. "I was in complete shock when I saw them on @chrissyteigen Instagram page!"

I also called Gloria over at Let Them Eat Cake, an NYC custom bakery, to ask if she would be able to make something similar to the Chrissy Teigen baby shower cookies, and she said she could totally look at a picture and do something very similar.

But Baking in Heels made the originals, which judging by the tag Giselle used #rosegold, those cookies were probably even more spectacular in person.

So here's the deal. If you want to get Chrissy Teigen's baby shower cookies, you can reach out to Giselle for the real deal, take her Instagram picture to your local custom baker and get them to take a shot at it, or you can even try and make them yourself. All you'll need is a good sugar cookie recipe, some cookie cutters and a whole lot of pink frosting. Unfortunately for the rest of us, that's about as close as we'll ever get to living like Chrissy Teigen.