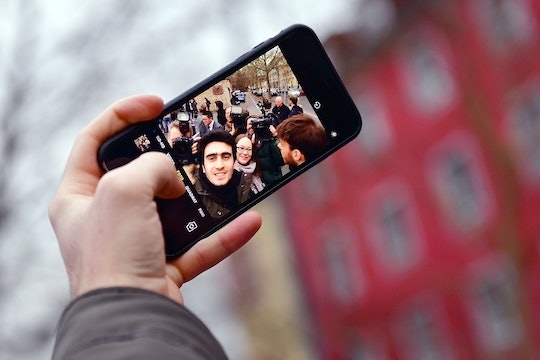 Since smartphones and social media became a mainstay in most people's daily lives, there has been constant competition for new apps to revolutionize the way we communicate — and for the already-existing apps to stay current. In 2013, that reality saw social media giant Facebook attempt to purchase the hugely-popular Snapchat for $3 billion, according to CNN, but when the deal failed, it seemed as though Facebook's backup plan was to just begin following in its competitor's footsteps. First, that meant the introduction of Instagram Stories (FB bought Instagram in 2012), a Snapchat-inspired video feature. But now, that same feature will be popping up in your Facebook app, too. Wondering how to get Facebook Stories? According to USA Today, the new feature will begin appearing on Tuesday (update your app if you don't see it), and users will be able to access it via the "Your Story" in the "Stories" bar at the top of the standard News Feed. From there, Facebook users can channel their inner Snapchat-love, sharing temporary photos and videos with their Facebook friends that will automatically vanish after 24 hours.

If you've long been a fan of Snapchat, or even if you first jumped onboard with the creation of Instagram Stories, the addition of Facebook Stories might seem like unnecessary overkill. Who needs another version? But the difference appears to relate primarily to demographics and reach.

Although it's been successful enough to compete with Facebook and Twitter for smartphone users' attention, Snapchat has mostly been popular among younger users, according to Reuters (not going to lie, I still don't actually know how to use it). With Instagram Stories though, Facebook was able to introduce the feature to a larger audience (five months after the launch, Instagram Stories had 150 million daily users, according to USA Today). And since Facebook itself is already much better at tapping into an older audience through it's original social networking site and smartphone app — 88 percent of people over 35 used Facebook during the fourth quarter of 2016, versus only 23 percent for Snapchat, according to Reuters — the unveiling of Facebook Stories is likely to be the first time that many older users will have actually engaged with the kind of features that Snapchat pioneered.

Of course, many have wondered if that kind of imitation is even fair — especially since Facebook hasn't even tried to hide the fact that both Instagram Stories and Facebook Stories were directly inspired by Snapchat. Back in August, for example, Instagram CEO Kevin Systrom admitted that "[Snapchat deserves] all the credit," for Instagram Stories, according to Tech Crunch, though he did add that it wasn't "about who invented something," but about how Instagram put its own spin on it. Similarly, according to USA Today Facebook product manager Connor Hayes said that Snapchat "did a good job" changing the way users interact on social media, even noting that "it's the best format for people to share videos and photos with friends in social apps."

But like Systrom before him, Hayes argued that the point shouldn't be about Facebook Stories' similarity to Snapchat, but about the greater overall shift towards a more visual online medium that will better meet users' needs. According to The New York Post, Hayes told reporters that Facebook's goal "is to give people more to do on Facebook and that’s really been the main inspiration."

One thing that's for sure? If Facebook Stories is successful, it will be a huge win for Zuckerberg and Co. As Jackdaw Research Chief Analyst Jan Dawson explained to USA Today, in addition to encouraging greater Facebook use, having a built-in Snapchat-like feature can also "[put] another dent in Snapchat’s user growth."

That's obviously not such great news for Snapchat, but according to The New York Post, the company has yet to show any signs of defeat. This month, Snapchat parent company Snap Inc. went public, and also hinted that social media wasn't the only thing it had up its sleeve. Under the direction of 26-year-old co-founder and CEO Evan Spiegel, Snap Inc. is reportedly involved in creating drones, according to The New York Times, and has said it considers itself to be a camera company rather than one focused on social media. Case in point? In Nov. 2016, Snap. Inc. released it's first gadget, $130 video-recording, Snapchat-synched sunglasses called Spectacles, according to Ad Week.

Either way, whether you love Snapchat or loathe it, you might want to brace yourself: chances are, you're about to see an awful lot of video filters and disappearing photos on your Facebook news feed.