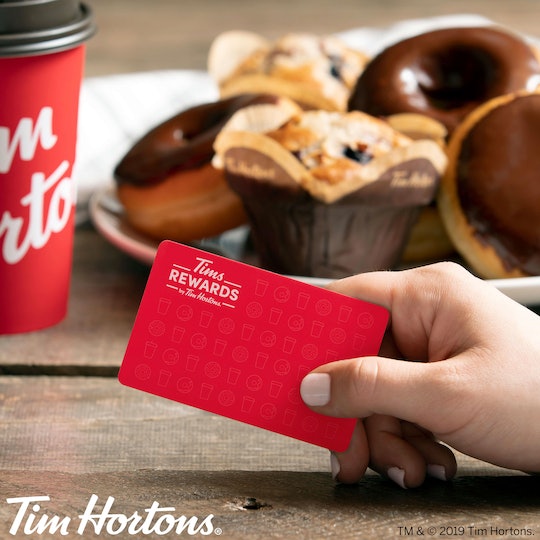 Psst: Here's How You Can Free Coffee From Tim Hortons

Sometimes, we are granted gifts greater than we deserve, and they come in the form of free things. And thanks to a new rewards system that just launched, this is how to get free coffee from Tim Hortons, because your donut habit is maybe about to pay off. (A little.)

Tim Hortons announced on Thursday that it is launching Tims Rewards, which is a loyalty program exclusive to the U.S., in which customers will be eligible to receive any sized hot coffee, tea, or baked good after every seven visits to a store. (There are exceptions, such as Timbits and bagels, however.)

To get your free coffee or treat, you just have to visit any participating Tim Hortons store in the U.S., sign up for a reusable loyalty card, or download Tims Rewards to your digital wallet on your iPhone or Android. You can use either of them interchangeably. Then you can download the mobile app, which allows you to track your rewards status, scan each time you visit the store, as well as keep track of your account and balance.

However, you can also get a free reward if you spend over $1.50 on your first purchase. So, if you buy two donuts and sign up for the rewards program, you can get a free coffee or tea.

If you sign up now, Tim Hortons will also be releasing exclusive mobile offers as well as other discounts as the months go on.

“Our guests deserve a rewards program as a thank you for their loyalty,” Shawn Thompson, President of Tim Hortons in the U.S. explained in a press release. “We’re offering both a reusable card and a digital friendly card on the Tim Hortons app so that it’s extremely easy for our guests to use over and over again.”

There are a few rules which you need to adhere to, according to the company's website. First, transactions less than $0.50 won't count toward your next reward, and there has to be at least 30 minutes between eligible transactions. The exception to this is mobile orders, which you can use to receive up to five reward points at once. Unused rewards will expire after 120 days.

If you're interested in seeing whether or not the location near you is participating, there is a map on the company's website on which you can enter your zip code and find out. (Or, at least, any zip code you pass on your commute, because hey, it's on the route anyway.)

News of the loyalty rewards comes just after the company announced that they were releasing new products as well. Tim Hortons has recently unveiled their new handcrafted tea line, which includes specialty teas and steamed milk drinks, Insauga.com reported. Available now are a London fog, apple cinnamon fog, and vanilla chai. The drinks are "around the $2 price range," the site reported, before adding that the three new drinks are as follows:

Though these drinks aren't available to be redeemed as a reward themselves, you can rack up those points by trying them out, and getting a free black coffee or plain tea, donut or other food as well. If nothing else, Tim Hortons truly knows how to enable our most depraved desires for various breakfast foods.