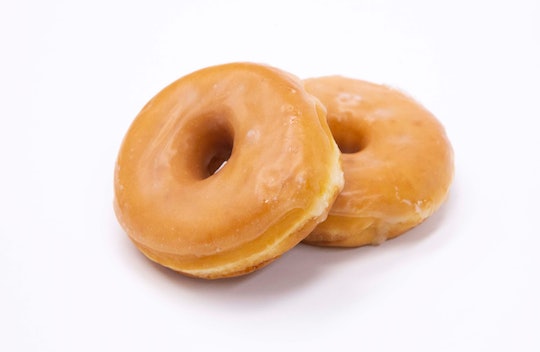 If you were already starting to feel fed up with the week, exhausted at the fact that the weekend still somehow feels impossibly far away, a light at the end of the tunnel has truly emerged. Because, guys, you can get free donuts at Walmart on National Donut Day, which is thankfully this Friday, June 7.

For those not in the know about the baked-good holiday, this Friday is officially National Donut Day, according to Food & Wine. It was established by the Salvation Army in 1938, set to take place on the first Friday of every June. Originating in Chicago, it was intended to be an occasion to celebrate the work of the Donut Lassies, a group of women who provided baked goods to soldiers during World War I. (How's that for your daily trivia?)

Since then, the day has really picked up traction. In addition to Walmart's free deal, according to The Times Leader reported, Dunkin' Donuts will be participating in their annual donut giveaway, as will Krispy Kreme. However, if you're partial to your favorite department store donuts, this is how to get your free donut from Walmart.

Walmart will be giving away a total of 1.2 million donuts, according to a press release from the company, which is a pretty massive quantity. If you want to get yours, you just need to visit the bakery section of any Walmart Supercenter that's participating in the day.

Each visitor is eligible to receive one free glazed donut, and it is limited to just that, one per person. The other caveat is that the donuts will only be available so long as supplies last.

However, there are 4,000 Walmart stores participating, meaning that your chance of finding a free treat is pretty high, given that you make a little time for a stop in your morning commute.

If you're someone who absolutely has to have a cup of coffee with your donut, you'll also be taken care of on that front. In fact, many participating Walmart locations will also be offering samples of Seattle's Best coffee, all for free as well.

You can visit Walmart's official website to see whether or not your local store will be offering the free items. Though many stores are participating, not every single one is, so it's important to check in before you make the trek out. (Remember: it also has to be a Walmart center where there is a bakery, meaning, a Walmart Supercenter, not just a regular Walmart.)

Of course, snagging a free bite is not the only way to celebrate this hallowed day. In fact, if you're really amped on donut appreciation, you can purchase a box to bring to your coworkers, or to enjoy with your family before or after work. Sure, you might not be able to get a full dozen for free, but in the spirit of the holiday, sharing is caring, and sharing donuts is pretty much the most selfless act of love imaginable.

National Donut Day is taking place this Friday, June 7. Visit any participating Walmart store and ask for your free glazed and coffee sample.