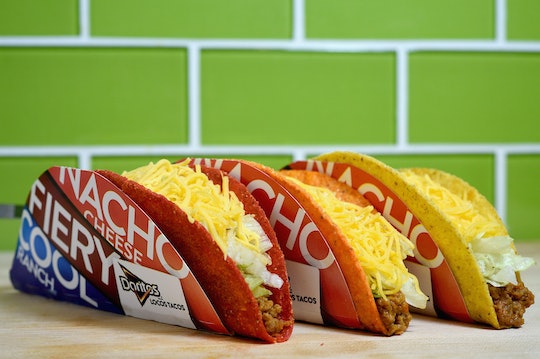 ATTN: You Can Get Free (Yes, Free) Taco Bell Today — Here's How

Most women enter their pregnancies with the aspiration to be as healthy and nourished as possible, only to be met with the abrupt reality that, you know, cravings and nausea happen, and sometimes, you really just need a taco to get through the day. Every so often, there are promotions that even make getting said tacos inexpensive if not free, and today, Nov. 1, is one of them. So here's how to get free Taco Bell today, because the company is reportedly celebrating a major sporting victory with a giveaway.

"Free tacos" is a phrase that could pretty much make anyone's day, but especially any pregnant woman having a craving. Thrillist reported that the chain restaurant is participating in its annual "Steal a Base, Steal a Taco" free food giveaway, which they started to show their support for baseball. The rules go like this: the first base was stolen by Mookie Betts of the L.A. Dodgers, in the 2018 World Series between the L.A. Dodgers and the Boston Red Sox.

To show their support for their team, the company has promised to give every customer in the United States one free Doritos Locos taco. However, there are some stipulations: the food is reserved for one per customer, you have to go between the hours of 2 p.m. and 6 p.m., and it is, of course, while supplies last.

And rightly so. In fact, one of the company's top executives has spoken out about how they plan to honor our taco-earning heroes.

"Every year, we're overwhelmed with the excitement from our fans when combining America's favorite pastime with America's favorite tacos," Marisa Thalberg, Global Chief Brand Officer at Taco Bell Corp said in a press release, as Forbes reported. "Now, we're knocking that out of the park by introducing even more ways for our fans to experience and commemorate the Taco Hero."

All of the mentioned athletes are now in the "Taco Hero Hall of Fame," and as MassLive reported, Taco Bell will also be releasing exclusive merchandise for each of the athletes. This will include baseball caps, trading cards and more.

Of course, it likely goes without saying that taco fans receiving word of today's offer are already pretty excited about it, as they've taken to social media to not only express their gratitude to both Taco Bell and Betts, but also to inform their friends and followers that today is indeed the day that all of your free taco dreams come true.

"Everyone don’t forget to get your free taco from Taco Bell between 2-6pm. You’re welcome. #StealATaco," one such fan tweet read.

It goes without saying that today is absolutely a very exciting day for fans of Taco Bell, whether you're having those pesky pregnancy cravings or, you're like the rest of us, and just love a good Doritos Locos at the end of a long day.

More Like This
HelloFresh Is Releasing Spaghetti Meal Kits Inspired By Buddy The Elf
Deb Perelman Could Do This Forever
Meal Prep Sucks The Fun Out Of Food
Moms, Just Eat The Fruit Dammit