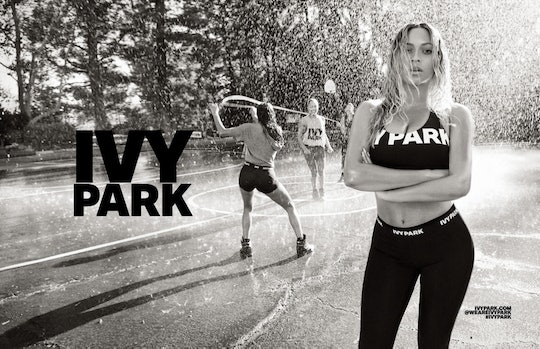 How To Get Ivy Park Clothing If It Sells Out, Because You Need To Get In Formation

You know, I'm not one to believe in good luck charms — but there's a small part of me that hopes that by wearing Ivy Park clothing, I will be able to channel some of that Beyoncé ferocity to my workout, and I can't be the only person who feels that way. Ivy Park launched this week, and eager fans brought down a website in their digital stampede to get the goods. A few pieces have already sold out, sending the Beyhivé into a frenzy. But don't worry — here's how to get Ivy Park clothing if it sells out.

Ivy Park selling out isn't really a surprise. Beyoncé is a solid businesswoman and badass, so she's got a following that any star would envy. If this were a limited edition release by one Ivy Park's retailers — Topshop, Nordstrom, and Zalando — then I'd say you have reason to worry about dwindling stocks. However, Ivy Park is going to be a continuing line, so stores will definitely be getting more Ivy Park leggings, crop tops, and headbands onto their shelves.

Judging by cofounder Sir Philip Green's words, we may even be seeing Ivy Park pop up in more stores. He told Women's Wear Daily that these are long-term partnerships and that Ivy Park is "just getting started." Green also hinted at further expansion in retailers and style, saying,

We have already had more than ten distributors call us today, wanting to work together. In terms of the product, we will see what’s selling best and expand the width accordingly. There has to be a balance, you need to have both the staples and the fashion.

But what if you're hearing this and thinking, "Yeah, uh-huh, that doesn't help me get my hands on my medium-size Ivy Park sports bra right now." (Because you need that Beyoncé mojo ASAP, and those bras are selling like hotcakes.)

If you really need an Ivy Park getup right away, check out eBay, where some entrepreneurial little shoppers have been selling sold-out (and, um, not-sold-out) Ivy Park pieces. Warning: the Ivy Park clothing sold on eBay is definitely marked up. Scanning through the offerings, you'll see $30 shoes marked up to $240 (and no, that does not include the $17.39 for shipping).

If you don't mind spending the extra cash, finding resellers on eBay or Craigslist will likely be your best bet. I can definitely understand the I need it now feeling one gets when scrolling through Topshop's Ivy Park collection, but if you can wrangle in your need for instant gratification, I have a feeling Ivy Park retailers will keep the good stuff coming. Who knows, they might even have more great pieces up their (Ivy Park) sleeves.