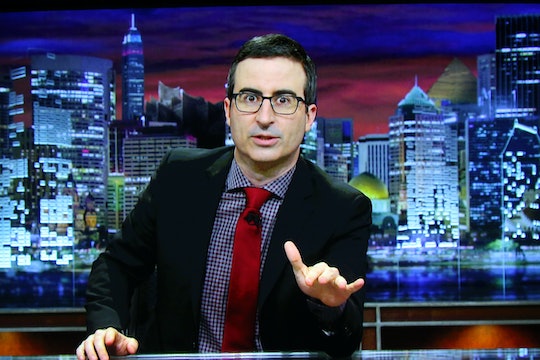 How To Get 'Make Donald Drumpf Again' Hats, Because The Donald Just Isn't As Cool As People Think

If you missed John Oliver's beautiful, systematic dismantling of the Donald Trump mystique on his most recent episode of HBO's Last Week Tonight, it's time to remedy that. It is glorious. Until now, Oliver has abstained from covering the antics of Trump's campaign (it gets enough free press), but enough was enough. In Oliver's own words, “At this point, Donald Trump is America’s back mole. It may have seemed harmless a year ago, but now that it’s become frighteningly bigger, it’s no longer wise to ignore it.” Oliver's method of undercutting the real estate mogul and presidential candidate? Change his name. Here's how to get "Make Donald Drumpf Again" hats.

So, turns out the Trump family name was changed from the much dumpier Drumpf a few generations ago by a prescient ancestor. Clearly, Trump and Drumpf have very different connotations. Oliver pointed out that many of Trump's supporters have rallied around him because of his name alone. Trump, as a brand, had become synonymous with wealth, success, lavish seaside condos, casinos, and beautiful women, due not necessarily to a great track record at business, but more because of an intense, lifelong marketing campaign by Trump himself. With his name-recognition alone, he was perfectly poised to seem attractive, strong, ruthless, and savvy to the ill-informed.

Drumpf, on the other hand, brings much different images to mind. Oliver was at his best: “Drumpf is much less magical. It’s the sound produced when a morbidly obese pigeon flies into the window of a foreclosed Old Navy. Drumpf: It’s the sound of a bottle of store-brand root beer falling off the shelf in a gas station minimart.”

In essence, Oliver wanted to help voters separate the man from the brand name they've become familiar with over the years. Because, while Trump, as a name, seems sturdy and trustworthy, Trump, as a candidate, has been anything but. Oliver said, “We have no way of knowing which of [Trump’s] inconsistent views he will hold in office … Will he stand by his statement that vaccines are linked to autism or his belief that Mexico is sending us rapists?”

Thus, Oliver launched a counter-campaign: #MakeDonaldDrumpfAgain. He informed the audience that his team wasted no time trademarking the Drumpf name and purchasing the domain DonaldJDrumpf.com, which is where you can buy your very own "Make Donald Drumpf Again" hats. (If you're interested, snag one soon; they may sell out. Pretty much an instant collector's item.)

Oliver is no fool. Like any great comedian, he knows that linguistics have powerful, oftentimes imperceptible, effects on our psyche. He's harnessing that to “uncouple the magical word [‘Trump’] from the man he really is.” And there's no getting around it; that man is a Drumpf.