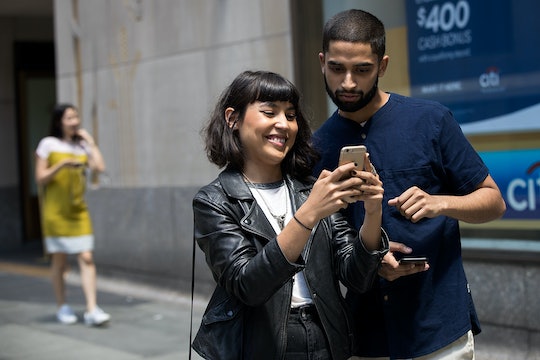 Ever since last Thursday, Pokemon is suddenly cool again. Wait a minute, what year is it? I promise it's not 1996, even though the phrase "Gotta catch 'em all!" is back in vogue. The Pokemon hype is back thanks to "Pokemon Go," a new mobile, augmented-reality gaming app from mobile app developer Niantic that has taken mobile phones by storm in less than a week since it was released for free. To make the most out of your "Pokemon Go" game experience, you'll need a constant supply of Poke Balls — those iconic red and white balls that allow players to "catch" the pocket monsters they encounter in the wild, and here's how to get more Poke Balls in "Pokemon Go."

By the way, the Poke Ball feature totally gets at why "Pokemon Go" is so popular right now: The app has basically taken the gameplay featured in the '90s Pokemon cartoon and transformed it into an actual, real-life game you can play in your hand and on the go — minus Team Rocket stalking you. Now, if you're out there on the hunt for more Pokemon, you're going to need a mighty cache of Poke Balls — and here's how you can bank them without breaking the bank.

Hit Up Your Local Pokestop For Free Poke Balls

In "Pokemon Go," players have the ability to interact with actual locations in their environment, whether it's hunting an elusive Psyduck, training at your local Pokemon gym, or checking out your local Pokestop. What's a Pokestop? Think of them as your Poke Ball refill station. Pokestops can be anything from an area landmark, to a community location such as your corner bodega or your post office.

As you approach the Pokestop indicated on the map in your game, tap on it. Flick your finger to spin it, and it'll spit out items — usually free Poke Balls, but can include other nifty items such as eggs you can hatch into Pokemon or even potions. Sometimes you might score a ton of Poke Balls; other times, not so much. It's all the luck of the game.

Yes, You Can Buy Your Poke Balls

Is "Pokemon Go" a free app? Yes, it is — but that doesn't mean there aren't in-game purchases. (How else will Niantic rake in the dough?) For 99 cents, you can purchase 100 Pokecoins, which will then allow you to purchase 20 Poke Balls in the game. You can see how quickly those simple 99-cent purchases can add up. When there are millions of players trying to "catch 'em all" around the globe having to pay 99 cents for a few handfuls of Poke Balls at a time, it's pretty easy to imagine how Niantic's investors must feel right now:

Now, if I'm really going to get down to brass tacks, the best advice for keeping a comfortable supply of Poke Balls on hand is simply to not need so many in the first place. To accomplish that, you'll need to master your Poke Ball throwing skills. Sure, it's easy to catch Pokemon on lower levels, but catching Pokemon gets harder as you level up. You'll want to practice throwing curveballs in "Pokemon Go" to increase your chances of a successful catch and score some major experience points in the process. For the particularly fast fingered, you can actually recover Poke Balls from missed catches.

Whether you're going to camp out in an area saturated with Pokestops or you're willing to empty your wallet for just a few more Poke Balls, there are plenty of ways to get your "Pokemon Go" fix on. Happy hunting!