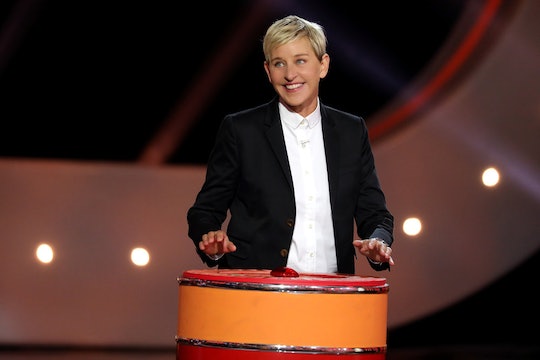 The only thing better than subjecting your child to being the star of a funny home video to get on The Ellen DeGeneres Show is to compete on the game show Ellen’s Game of Games yourself. It might seem like a long shot, but after watching the Jan. 8 Season 2 premiere on NBC you’re probably going to be wondering how to get on Ellen’s Game of Games so you too can make a fool of yourself and hopefully walk away with some prize money. Where some game shows might require you to simply fill out a form and hope that you’re chosen from a pool of potential contestants, it’s a little more involved than that for this new game show.

There is a long form to fill out online, but along with that, you’ll need to submit a video explaining who you are, what your favorite games are, why you want to be a contestant, and what you’d do with the $100,000 prize money. There are no wrong answers, but maybe something more exciting than "I’ll pay off my student loans" will get you to the top of the list. No judgments here — that’s just legitimately my first answer to that question.

The form also asks for a good paragraph or so of your story and more details about why you want to compete on the show. It’s pretty straightforward and seems like you’d have a better chance of being chosen since you get to plead your case, so to speak. Although the Season 2 officially premieres on Jan. 8, they’re already casting for Season 3. There’s no time like the present to get in your own video and subject yourself to televised embarrassment.

As the name of the show suggests, it’s not your typical game show. Some of the games are taken from The Ellen DeGeneres Show segments, so they aren't totally unfamiliar to some new viewers. "Everything’s bigger and scarier," Ellen DeGeneres said in an interview with iHollywoodTV. "If you like TV the whole family can watch, you like this show. You’ll love this show."

Ellen’s Game of Games isn't about answering trivia questions from a comfortable leather chair and advancing to a round of more difficult questions in order to win a progressive pot of money. There are trivia questions, but the show takes things up a few extra notches by making players do things like spin around until they’re dizzy and run to a buzzer in order to answer a question. Or, during the Stink Tank game, contestants’ loved ones have to answer questions for them or the player is dunked into a tank of green foggy liquid. It’s definitely fun to watch, but I might have to mentally prepare myself before actually playing the game.

Ellen’s Game of Games does seem like fun to compete in, especially since there’s that cash prize at the end of it all. But I highly suggest watching a few episodes before you start working on your application and entry video. It’s definitely not going to be a cakewalk for anyone.