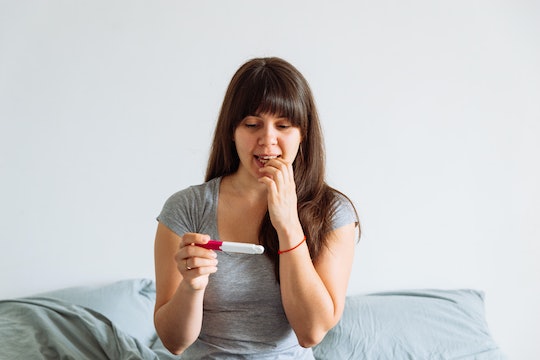 If You're Hoping To Get Pregnant With Multiples, Here's What Affects Your Chances

I've always known I wanted to be a mom. Even as a very young girl, I remember how fascinated I was with my aunt's pregnancies and the little siblings of my friends. Coming from a family with more than its fair share of multiples, I also knew that babies don't always come alone. That worried me as I got older, but it also intrigued me. Your children are born with a built-in playmate and best friend, and you don't have to keep getting pregnant. Win, right? So if you want twins or more, here's how to get pregnant with multiples, according to an OB-GYN and a few old wives' tales.

Getting pregnant with twins is a lot about chance, and a lot about genetics. According to the Centers For Disease Control and Prevention (CDC), if you are of an advanced maternal age (over 35), if you are black or hispanic, if you are tall, and/or if your family has a history of fraternal twins or triplets, you are more likely to conceive twins. Researchers aren't saying that if you want to have multiples that you should put off having children — that's a fool's errand — but they're saying that if you do wait, the likelihood of you having twins increases substantially.

The science of it is slightly different than what you may have heard your grandmother tell you. I spoke with Dr. Rebecca Dunsmoor-Su, MD, MSCE a board-certified OB-GYN at RenuvaGYN. She tells Romper that multiples, even high order multiples of three or more, can happen naturally. However, she doesn't shy away from the fact that many sets of multiples nowadays are the product of assistive reproductive therapy and not just the trick of nature or a lucky strike. There is simply more fertility treatments being done now, and more multiples being born because of them.

"In terms of multiples, the most common way of getting pregnant with multiples is through assisted reproduction, either ovulation stimulation or IVF," Dunsmoor-Su says. "There are fairly strict guidelines in place through the National Reproductive Endocrinology Society that speak to limiting the number of multiples, and how to achieve that, as multiple pregnancies are at much higher risk for bad outcomes and preterm delivery." We all remember Octomom, right? That's never the goal of the reproductive endocrinologist. That's the outlier.

Having multiples carries inherent risk that doctors want to avoid. It goes with that whole "first do no harm" bit of the Hippocratic Oath they adhere to. But other than taking fertility drugs, there's no "magic" way to get pregnant with multiples.

There are some old wives' tales about getting pregnant with twins or more though, and some of them are downright hilarious. I spoke with Lindsay Chase, a PhD candidate in medieval folklore from Brooklyn, New York and asked her how to get pregnant with multiples, assuming she'd have some interesting answers. She tells Romper that the first thing you need is ice cream, or at least very cold milk. "In ancient Scandinavia, midwives believed that the women who drank the most fatty milk — in the winter — would give birth two strong Viking twins." Turns out, this actually might have some science to it. According to a researcher studying multiples, women who drink milk are more likely to have twins than vegans.

Chase also tells Romper that the more virile your Viking is, the more babes you will birth. "Tradition holds that the strongest of warriors will have more children to carry on their name and give them a good funeral. Two at a time was what was hoped for." So pick the biggest dude so you can make many babies with him, and then set him in a flaming boat when he dies. Check.

Or maybe just try the ice cream thing if you've already picked your mate. Unless, of course, you've already married Thor and had twins, at which point, you've done well, carry on. Funeral is the next bit.